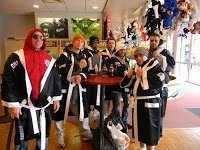 While the overall sport of open water swimming is growing rapidly and globally, Polar Bear Swims, a niche subset of the sport, is exploding.

One example is the Polar Bear Plunge on the Seaside Heights boardwalk near The Aztec. It is a charity event for the Special Olympics New Jersey. The wildly successful Polar Bear Plunge is held tomorrow and it has already raised over US$1,124,000 in donations this year.

4,000 crazily colorful thrill seekers took to the cold Atlantic waters last year and this year is forecast to be at least 5,000 participants. Local restaurants, bars and local establishments offer Plunge Specials for the large social celebration for a good cause.

Its sister event, also a charity for the Special Olympics, was in Wildwood in January. “In past years, Plungers have included 6-year-olds to 70-somethings, mayors, police chiefs, officers, corporate teams, families, high school clubs, fraternities, and everyone in between,” wrote the Special Olympics New Jersey.

With the water temperature at 38°F (4°C) and air only slightly warmer, Seaside Heights will be packed with teams of merry cold water adventurers – many dressed for a battle with the elements, all in good fun and cheer in a day-long celebration with hours of a post-plunge party.