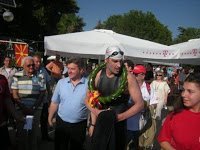 The man is a marathon swimmin machine whose airmiles deserve a gold medal alone. After winning his tenth straight victories in lac St-Jean and lac Memphemagog in Canada over the last few weeks and competing in the 10K and 25K world championship, Petar set off again and won his unprecedented ninth straight victory in the Ohrid Swimming Marathon in Macedonian.

The FOCUS Information Agency reported that Petar won in 5 hours and 37 minutes.

Petar told the FOCUS Information Agency, “I do not like to swim in a group. I managed to break from the others somewhere close to Pestani and kept my lead. I decided to swim alone so as to secure a victory, just like in the last couple of years. Every victory is equally important to me, no matter whether it is gained with a one-second or 50-meter lead” after being greeted by Macedonian President George Ivanov.

German Alexander Studinski and Argentinean Damian Blaum were second and third overall while Croatia’s Karla Sitik won in the women’s division in a field of 22 swimmers from 10 countries.

Petar’s travel do not cease as he prepares now for a fast mile race in Great Britain at the highly competitive Great Swim and a 28.5-mile world record attempt around Manhattan Island, both in early September.