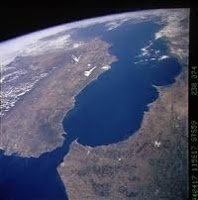 With great conditions, an interational group of marathon swimmers tackled the Strait of Gibraltar where ten athletes ultimately crossed from Spain to Morocco

A documentary is being editted now on the challenges and obstacles that these swimmers faced, especially Amy, a cancer survivor, and Alan, a car accident victim, who both overcame tremendous odds to become only one of the relative few to swim between Europe and Africa. Their story is an engaging, compelling one brought to the silver screen.