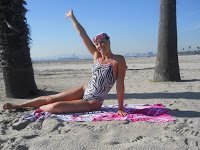 Courtesy of WOWSA, Redding, California. It is December and the words, “one hundred one hundreds” is commonly heard on the pool decks from Australia to Ireland, a challenge to freestylers everywhere.

When a coach or a group of swimmers mentions 100 x 100s, you know it is approaching the New Year and there is one serious group of swimmers getting ready for a year-end test of their physical stamina and mental strengths.

The tradition started in the 1970s and is now commonplace.

100 x 100s is a pool swimming distance freestyle interval set that is a tradition among competitive pool swimmers, channel swimmers, and channel swimmers. One hundred swims of 100 yards or 100 meters each for a total of 10,000 yards or meters. The set is conducted in a pool, either on one consistent interval or performed at different intervals. The set is usually done during the year-end training period by competitive age-group swimmers, collegiate teams and adult masters swimmers.

But some distance freestylers go even further.

Ned Denison pushes adult English Channel aspirants to 100 x 200s in winter while Coach Mark Wagner in Northern California pushes his athletes to an even greater level. The Redding Swim Team set – done during their annual Hell Well – includes one five-day period of a set of 100 x 100 … twice per day. That is 20,000 yards per day five days in a row or 100 km (62 miles) – enough to get anyone through an open water swim.

Lexie Kelly (shown above), recalls, “I was so tired [during Hell Week] that I didn’t even want to brush my hair. But we all did it and we looked forward to it. I did it year after year with the rest of the team.”

When a swimmer inevitably feels down, tired or depressed during an open water swim, they dig deep – or get out. Successful swimmers often dig deeper than they ever experienced or even knew possible. With Hell Well’s 10 x 100 x 100, the athletes at the Redding Swim Team have the experience to ride the storm, to weather the obstacles, to overcome the barriers.

Coach Wagner explains his philosophy, “It’s a test mentally and physically for the athletes. It’s seems scary for the rookies, but once they complete it, the sense of accomplishment is unmatched. For the seasoned athletes, it provides a different test: I’m really tough enough mentally to go through this again physically. The surprising results those athletes realize they can handle anything mentally or physically.”