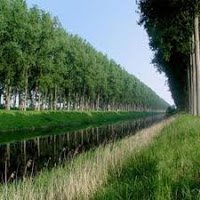 The race organizers for the Damme-Brugge Open Water Swim were nominated as one of the 2010 World Open Water Swimming Performance of the Year as the race celebrated its 100th year anniversary this year.

As a part of the Belgium Swimming Federation though a bit rogue, the race is held in Brugge, a historic and important city in Flanders. The swim is held in the same canal as the former Flanders Marathon that started in Sluis and went well into Belgium and back.

Well-known swimmers from Belgium, Great Britain and the Netherlands have been crowned winners over its 100-year history. The traditional 4.5K course is from Damme to Brugge, but a 5K course was added about 20 years ago with a start 500 meters norther of Damme. The 4.5K race remains popular for non-federation swimmers and triathletes with bets at the local bars due taken on some of the amateur swimmers.

The swim has both breaststroke and freestyle division, traditional open water swimming in the Lowlands (Belgium and The Netherlands) that attract swimmers of all abilities.

As Richard Broer, a board director of the International Marathon Swimming Hall of Fame says, “Brugge is quite a nice event and a fun place to swim.”

After 100 years, it has certainly proved itself to be one of the world’s best open water swims.