1000 km From Mumbai To Mangalore 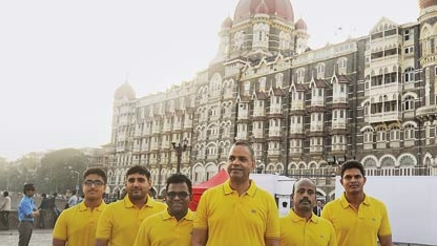 1000 km From Mumbai To Mangalore

The Sea Hawk team is off again in search of regaining its ultra-marathon distance relay record.

The team of six Indian swimmers who completed a charity swim of 433.11 km (269.1 miles) along the Konkan coast to the Gateway of India in Mumbai, India in 156 hours in 2015 are attempting around ultra-marathon again. This time, they are attempting a 1,000 km relay from Mumbai to Mangalore.

The 2016 Sea Hawks include Mehta, Singh, Narihari, and Tokas together with newcomers Shrikant Palande swimmer-coach Rahul Chiplunkar and observer Shekhar Kale from the Swimming Federation of India.

The relay started in the 28°C (82°F) water at the Gateway of India on Saturday evening and is expected to continue swimming non-stop for two weeks until they reach Mangalore on December 10th. “The first three days are horrible,” admits the 41-year-old leader Singh. “It’s your mental strength and the motivation that keeps you going. This is an attempt to spreading the message of peace and condemning terror. Our team comprises people from all strata of society. But they are all of the same mindset and feel strongly for the cause.”.”

Ultra Long Distance Relays from the 1990s to the Present

2006: Round Ireland Swim was a non-continuous stage relay around the island of Ireland from July to August 2006 covering 1,310 km, a total of 830 miles in circumference over the course of 56 days including a total of 35 swim days by Anne Marie Ward, Ryan Ward, Tom Watters, Ian Claxton and Nuala Moore with Expedition Leader Henry O Donnell.

2008: Lake Cane Relay included 2 teams of 50 swimmers, each doing 2 km, who covered 100 km in 37 hours 6 minutes in Lake Cane in Orlando, Florida, USA under the leadership of Dr. Lucky Meisenheimer in December 2008.

2011: Windermere 12-way Warriors was a 6-person relay that swam 12 non-stop crossings of Windermere in the Lake District of England. The team of Liane Llewellyn, Thomas Noblett, Keith Bartolo, Michelle Lefton, Michelle Sharples and Dee Llewellyn swam 126 miles (202.7 km) in 75 hours 32 minutes on 27-30 May 2011 in 10°C water.

2011: Japan to Taiwan Ocean Swim Challenge was a 6-person 120 km (74.5 miles) relay from Yonaguni Island in Okinawa, Japan to the eastern shore of Taiwan. The team of Kazuya Suzuki, Atsushi Suzuki, Masaya Shimizu, Kenta Ishii, Haruki Yamamoto, and Kouhei Yamada took 50 hours to complete and raised nearly US$100,000 for charity.

2014: Cyprus Israel Swim was a 6-man relay that swam 380 km (235 miles) from Cyprus to Israel in 123 hours 10 minutes. The team swam from Paphos Port Cyprus in Cyprus at 2:20 pm on 5 October 2014 and finished south of Rishon, Israel at 5:30 pm on 10 October and included Udi Erell, Doron Amosi, Ben Enosh, Ori Sela, Oded Rahav, and Luc Chetboun with a support crew of Erez Amir, captain Nimrod Or and Uri Brown.

2015: The Sea Hawk was a team of 6 Indian open water swimmers who completed a charity swim of 433.11 km (269.1 miles) from Dona Paula in Goa along the Konkan coast to the Gateway of India in Mumbai, India in 156 hours between 13-19 February 2015 that included Paramvir Singh, Gullupilli Narhari, Ankan Kumar Patel, Vicky Tokas, Ganesh Palande, and Manav Mehta.

2015: Swim4Good Costa Brava relay was a 6-person Spanish team that swam the length of the Costa Brava from Blanes to Portbou in Spain, finishing in 32 hours 7 minutes for the 118.6 km distance in July 2015. its swimmers included Guillermo Sagnier, Christian Puentes, Alberto Compte, Jordi Cañellas, Mauricio Prieto, and Esteban Raventós with Captain Toni Fiol.