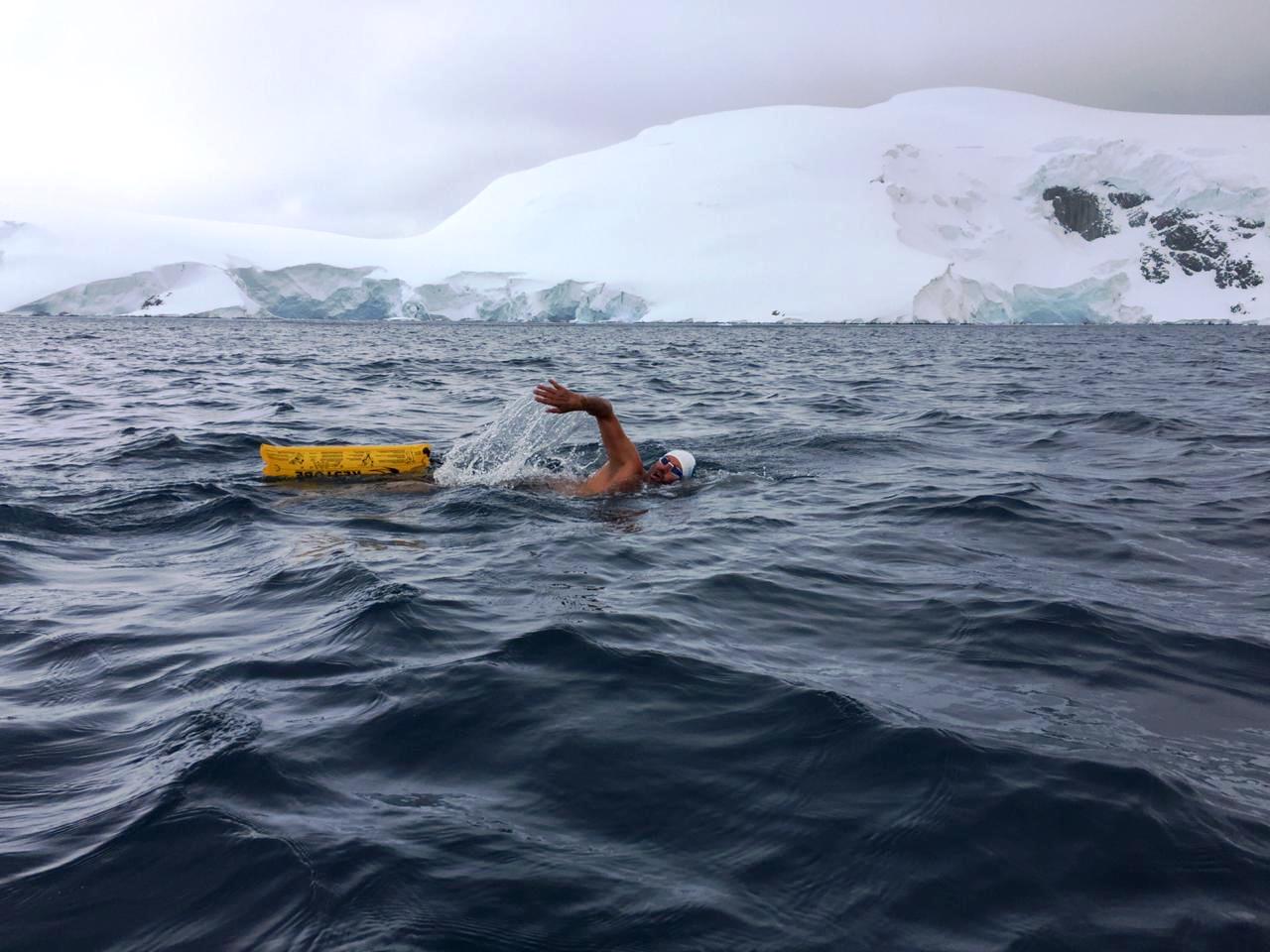 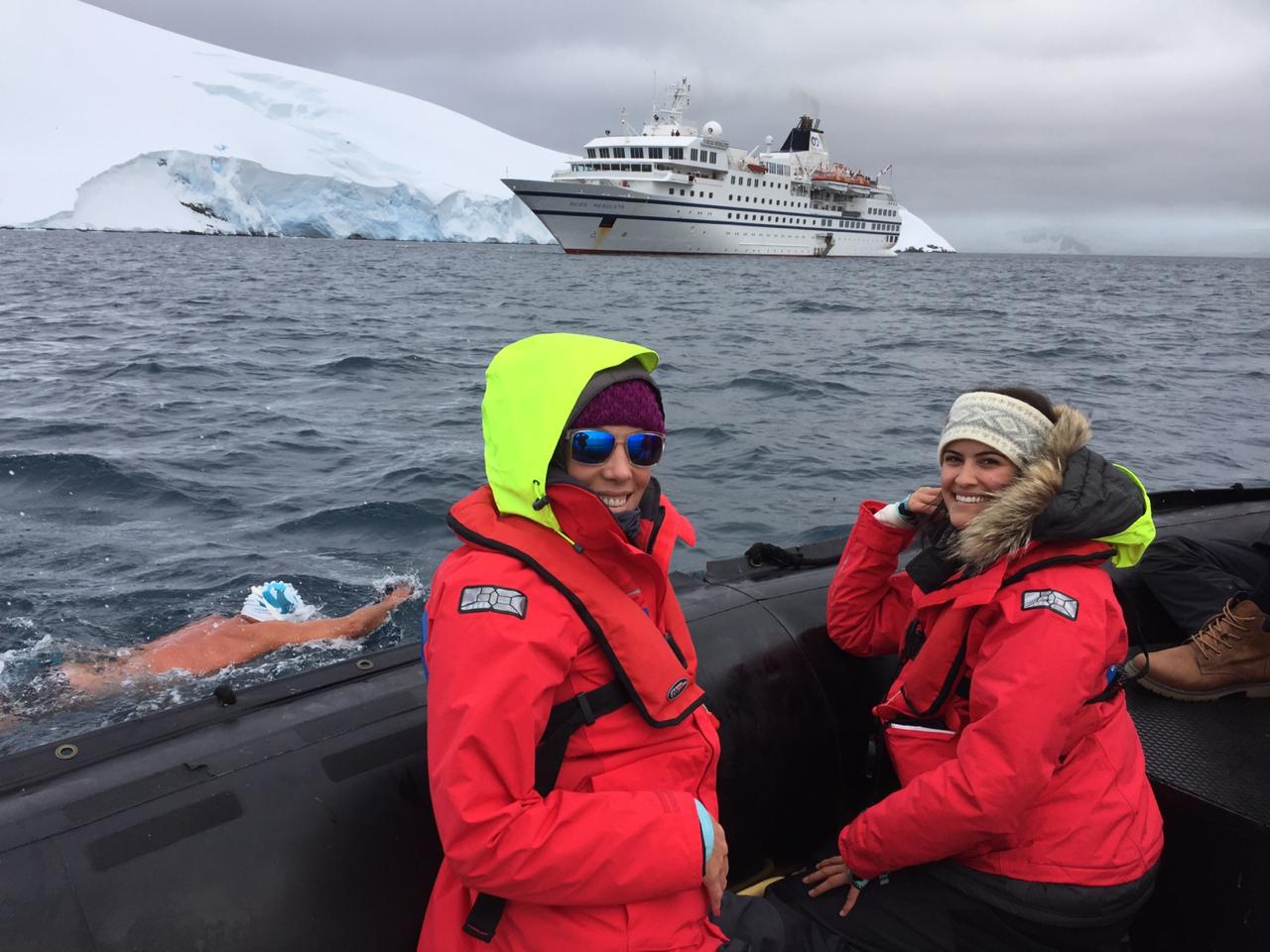 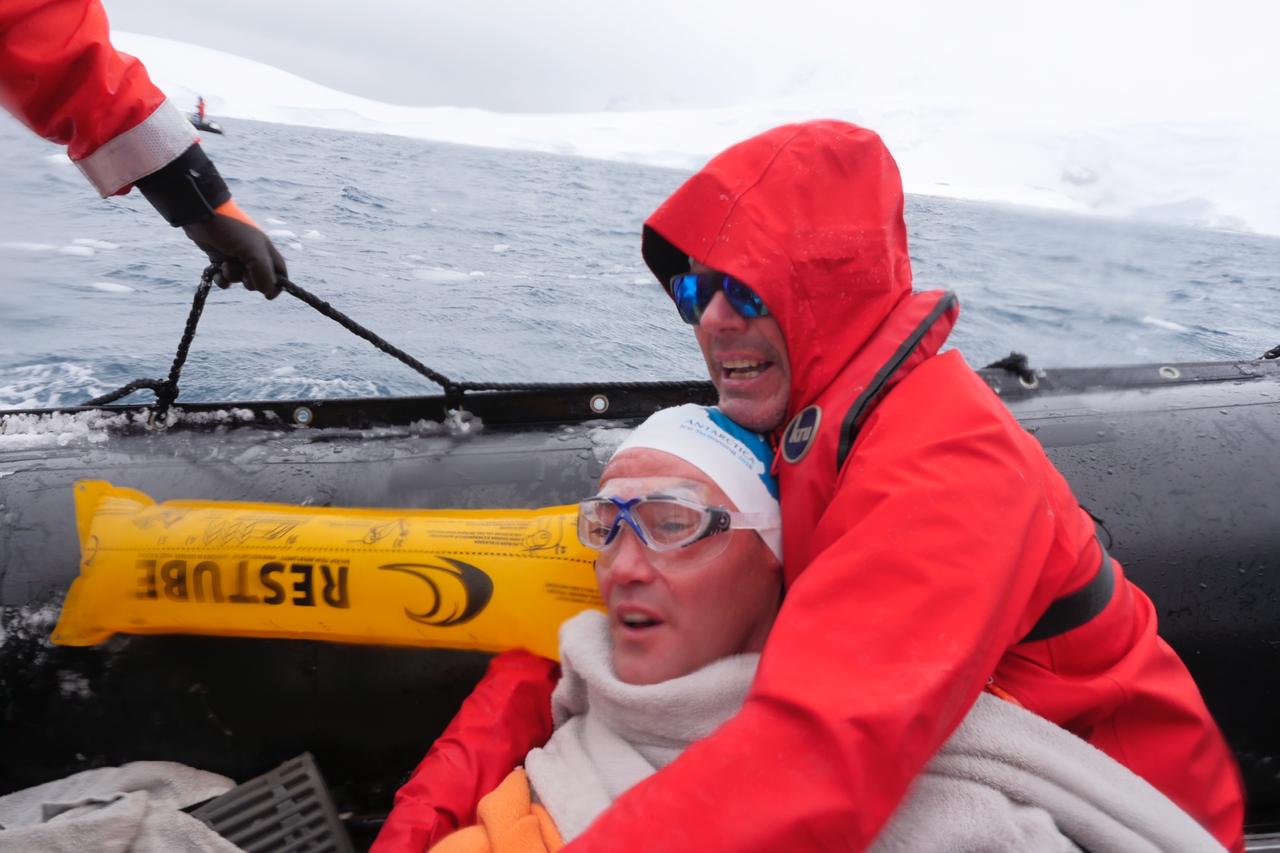 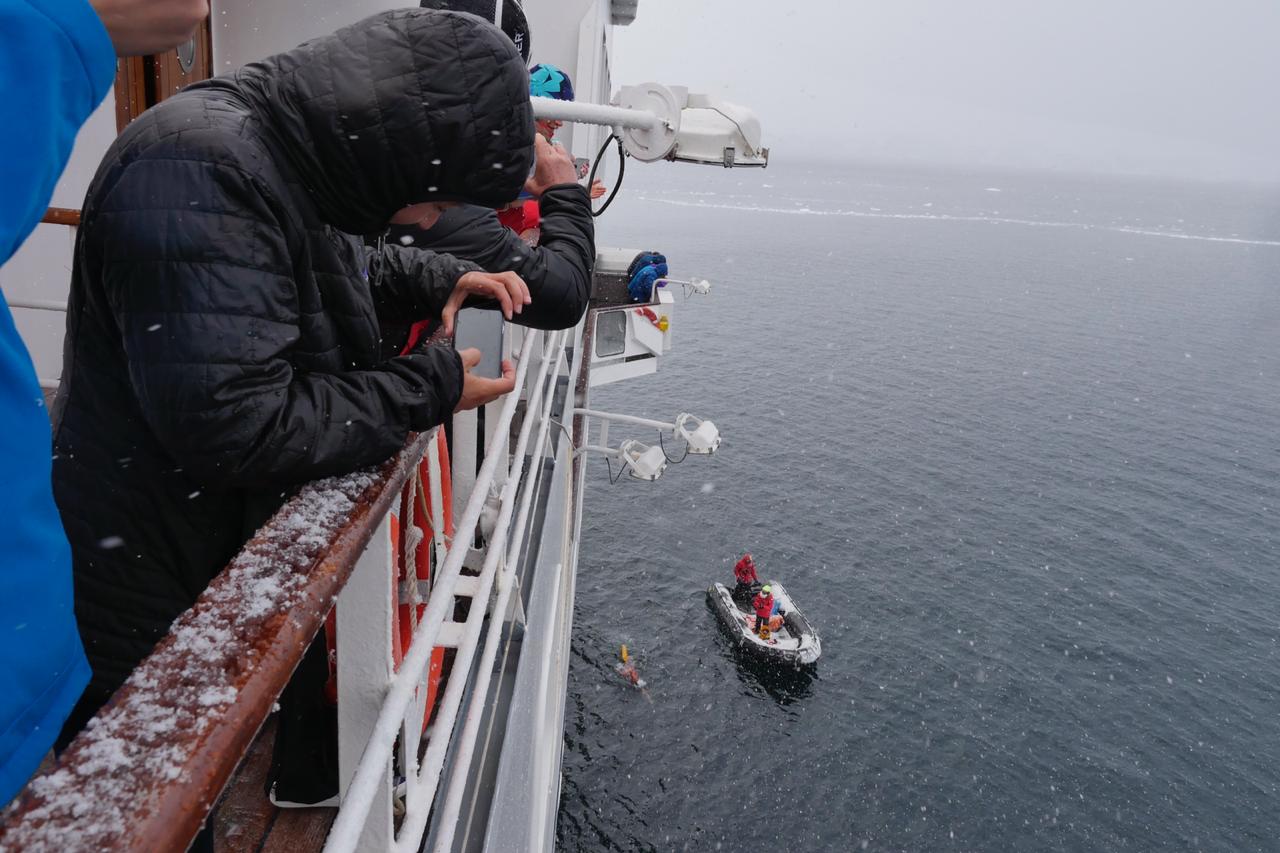 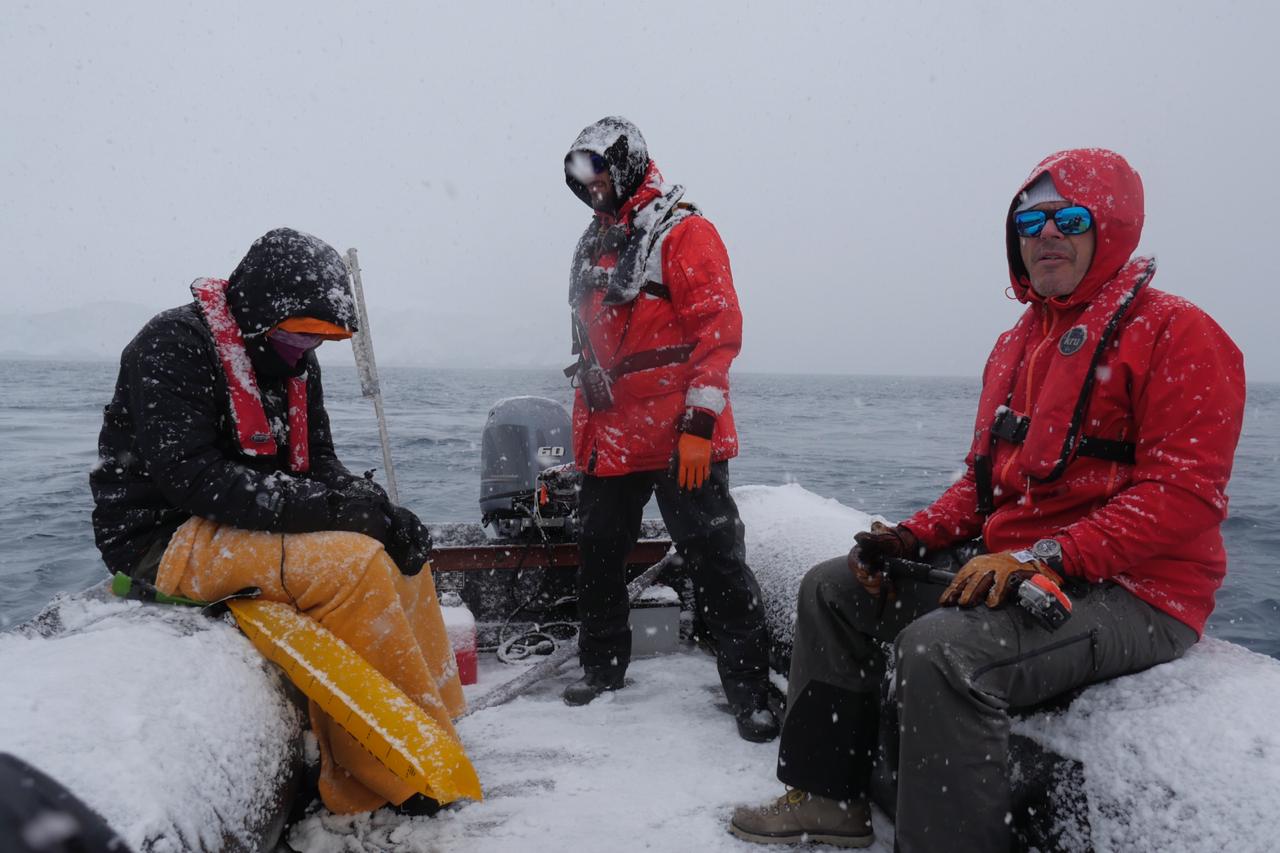 Courtesy of Ram Barkai and Jean Craven in the Southern Ocean near Antarctica.

Ram Barkai was the leader of the Antarctica Ice Kilometer Swim – and the last to enter the water of the Southern Ocean in Antarctica.

There were 14 swimmers entered in the pioneering event – and all 14 finished and established a precedent on how to conduct such an event safely and reasonably. They were both patient and professional, simultaneously courageous and cautious.

Guided by Zodiacs alongside the OneOcean expedition cruiser, RCSG, the intrepid group swam 1000 meter each in the -1.4°C (29.48°F) water.

Support staff and South African emergency physician expert, Dr. Sean Gottschalk, were immediately ready to perform rescue operations if necessary, but all the swimmers were mentally and medically fit to withstand the extreme conditions.

The group had to go in four heats over the course of 3 days. Like English Channel swimmers waiting in Dover for a break in weather, that may never come before they have to return home, the 14 swimmers faced a similar wait – a window of opportunity that would allow the swim to take place in reasonably calm conditions.

This is never a given along the Antarctic Peninsula. The weather always changes constantly. Swimmers would get ready – even to the point of being suited up waiting to jump in the water – and then the event was interrupted with the dynamic weather conditions.

“We did a test swim on November 22nd after we decided on a a location in Port Lockroy, a natural harbour in front of the Antarctic Peninsula.

Our strategy included heats of 3 or 4 swimmers who were accompanied by support and rescue staff in rubber ducks. After the first two successful heats with seven swimmers (41-year-old Alexander Brylin of Russia, 55-year-old Yunfeng Wang of China, 44-year-old Leszek Naziemiec of Poland, 52-year-old Paolo Chiarino of Italy, 54-year-old Andrey Agarkov of Russia, 33-year-old Samantha Whelpton of South Africa, and 51-year-old Sergio Salomone of Argentina), the currents and wind started to create havoc and our boat management had to pull up anchor.

We sailed to our next possible swimming location, Mikkelsen Bay, with the hope that the weather would calm down and allow the remaining seven swimmers to complete the swim.

At Mikkelson Bay, we faced a very narrow weather window and decided to combine heat 3 and 4. It was our only chance to give all the swimmers a chance

True to his nature as a leader, Barkai was the last swimmer to enter the water. 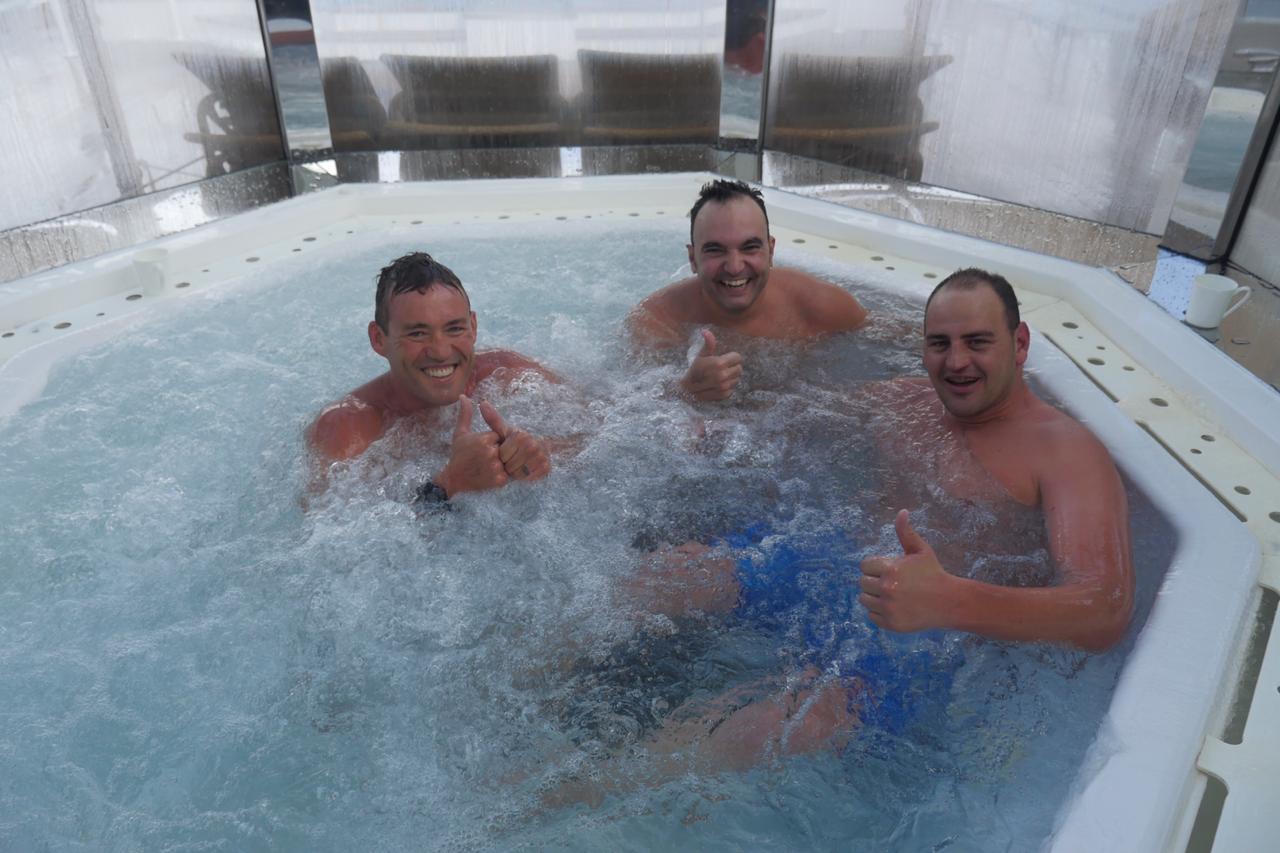 After each swimmer completed their swim, the rewarming recovery protocol was essential to success.

“Recovery involved the quick accessing of the expedition ship’s sauna and jacuzzi area under the close supervision of Dr. Gottschalk,” explains Barkai. “Some swimmers’ core body temperature measured only 28°C (82.4°F) in the recovery room after the swim.

Consider everything that the swimmer had faced until swim time – extensive travelling from their home countries including two solid days of flight and two additional days in rough seas, were required to reach our destination. Crossing Drake Lake was a challenge in itself with 10 meter waves and cutlery and plates flying around in the dining room of the ship
.”

Madswimmer founder Jean Craven explains the background of the organized event, “Others have swum in Antarctica waters before, but it has never been an official event. Barkai, who has worked almost two years to put this major event together, applied International Ice Swimming Association rules to make it official and will also apply for a Guinness World Record now that it is done.” 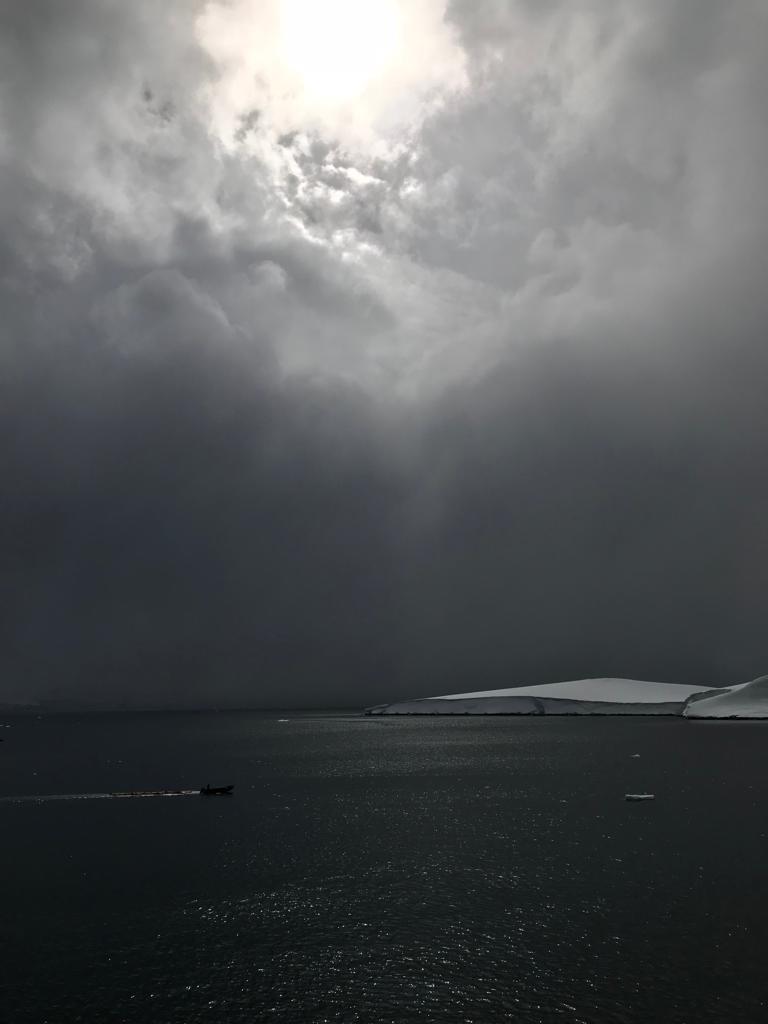 Craven decided to set a Madswimmer fundraising target from R50,000 to R500,000 for children’s charities. “Getting here was no small feat. Raising only a few rands will not justify the effort. We hope the swim will inspire others to do their part to make this world a better place and give underprivileged children a chance to become the worthy citizens they deserve to be.” Madswimmer has raised over R9,000,000 over the years to support these charities [see www.madswimmer.com].

For a video of the event, visit here.