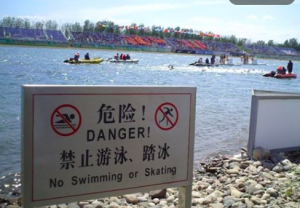 Courtesy of WOWSA, Beijing, China. Way back 11 years ago almost to the day, 16-year-old American Chloe Sutton won the qualification race in the Shunyi Olympic Rowing-Canoeing Park to earn her spot in the 2008 Olympic 10K Marathon Swim finals that would occur later in July. The women’s 10 km marathon swim was the first open water race held in a modern-day Olympic venue, although some of the signs along side the rowing basin were not meant for the elite marathon swimmers who were competing on that day. Copyright @ 2008 – 2019 by World Open Water Swimming Association