16 Swim 88 from Hernandarias To Paraná 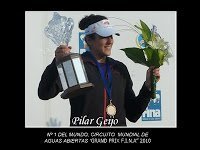 The 88K FINA Open Water Swimming Grand Prix from Hernandarias to Paraná in Argentina (Maratón International Hernandarias – Paraná) is one long way to swim, even if it is downstream.

Defending champion Pilar Geijo returned to the top of the podium on the women’s side, finishing first in 9:30.43 followed by fellow Argentina Antonella Bogarin in second (9:52.02) and Spain’s Esther Nunez Morera third (9:54.24). The final results for both men and women were as follows: