1937 Cartoon About Winning A Marathon Swim 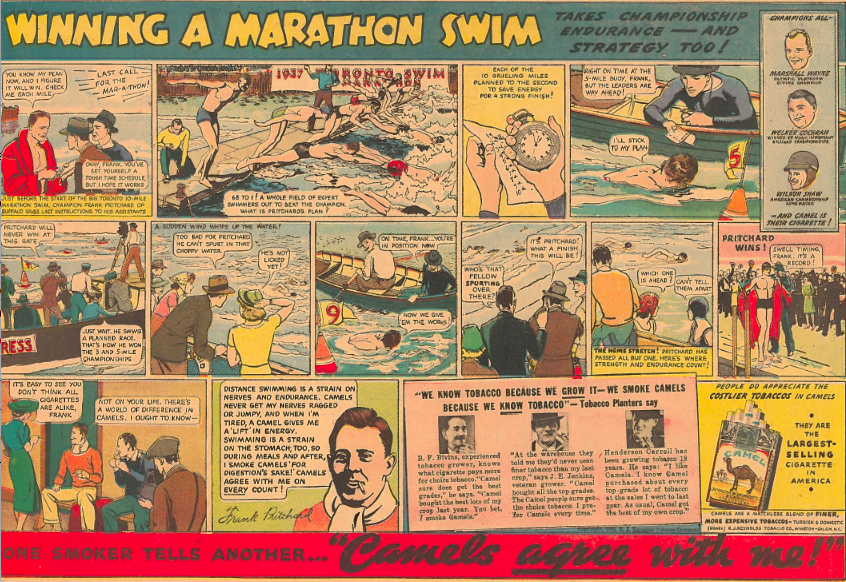 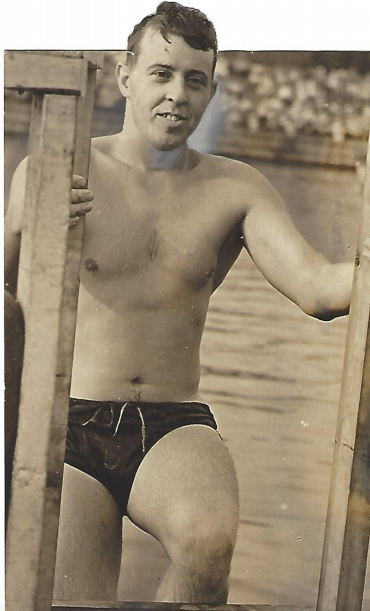 Jim Pritchard*, grandson of Francis ‘Frank’ Pritchard, an American open water swimmer who was inducted in the International Marathon Swimming Hall of Fame in 2009 as an Honour Swimmer, provided the cartoon above, published in 1937 entitled, Winning A Marathon Swim.

Pritchard was active in marathon swimming between 1927 through 1938. During his early career, Pritchard finished second in the 1927 National A.A.U. 4.5-mile championships and fourth in the 1928 USA Olympic Trials in the 1500-meter freestyle.

Between 1930 and 1937, Pritchard participated in the most prestigious marathon swimming event of the time, the Canadian National Exhibition marathon swims in Toronto, Canada. In 1931, he finished fourth. In 1933, he finished third. In 1934, he finished second. In 1935, he finished second again. He also won the 1934 Hearst 15-mile Swim in Lake Michigan in Chicago, the 1934 and 1935 Blue Water Carnival 12-mile Swims from Sarnia, Ontario, Canada to St. Clair, Michigan.

In 1936, he finally won the Canadian National Exhibition marathon swim in Toronto. In 1937, he defended his title and his race record that lasted more than 10 years. His victory was promoted by Camel Cigarettes and the subject of this 1937 cartoon, ‘Winning A Marathon Swim Takes Championship Endurance – And Strategy Too!’, shown above.

Panel 1 (upper row):
Announcer: “Last call for the marathon!“
Swimmer (Frank Pritchard): “You know my plan now, and I figure it will win. Check me each mile.”
Coach: “Okay, Frank. You’ve set yourself a tough time schedule, but I hope it works.”
Caption: Just before the start of the Big Toronto 10-mile Marathon Swim, champion Frank Pritchard of Buffalo gives last instructions to his assistants.

Panel 2 (upper row):
Banner: 1937 Toronto Swim Marathon
Caption: 65 to 1! A whole field of expert swimmers out to beat the champion. What is Pritchard’s plan?

Panel 3 (upper row):
Caption: Each of the 10 grueling miles planned to the second to save energy for a strong finish.

Panel 4 (upper row):
Coach: “Right on time at the 5-mile buoy, Frank. But the leaders are way ahead!“
Swimmer (Frank Pritchard): “I’ll stick to my plan.”

Panel 6 (middle row):
Coach: “Pritchard will never win at this rate.”
Assistant: “Just wait. He swims a planned race. That’s how he won the 3 and 5-mile championships.”

Panel 7 (middle row):
Description: A sudden wind whips up the water!
Male fan #1: “Too bad for Pritchard. He can’t spurt in that choppy water.”
Female fan #2: “He’s not licked yet!“

Panel 10 (middle row):
Female fan #4: “Which one is ahead?“
Female fan #5: “Can’t tell them apart.”
Caption: The home stretch! Pritchard has passed all but one. Here’s where strength and endurance count!

Panel 12 (bottom row):
Female fan #6 (with cigarette in hand): “It’s easy to see you don’t think all cigarettes are alike, Frank.“
Swimmer (Frank Pritchard): “Not on your life. There’s a world of difference in Camels. I ought to know…“

Panel 13 (bottom row):
Swimmer (Frank Pritchard): “Distance swimming is a strain on nerves and endurance. Camels never get my nerves ragged or jumpy, and when I’m tired, a Camel gives me a ‘lift’ in energy. Swimming is a strain on the stomach, too, so during meals and after, I smoke Camels ‘for digestion’s sake!’ Camels agree with me on every count!“

Panel 14 (bottom row):
Tobacco Planters: “We know tobacco because we grow it. We smoke Camels because we know tobacco.”
B. F. Bivins, experienced tobacco grower, knows what cigarette pays more for choice tobacco. “Camel sure does get the best grades,” he says. “Camel bought the best lots of my crop last year. You bet, I smoke Camels.”
“At the warehouse they told me they’d never seen finer tobacco than my last crop,” says J. E. Jenkins, veteran grower. “Camel bought all the top grades. The Camel people sure get the choice tobacco. I prefer Camels every time.”
Henderson Carroll has been growing tobacco 18 years. He says: “I like Camels. I know Camel purchased about every top grade lot of tobacco at the sales I went to last year. As usual, Camel got the best of my own crop.”

Panel 16 (bottom):
“One smoker tells another…”Camels agree with me!“

* According to Jim Pritchard’s father, 79-year-old Tom Pritchard, son of Frank, says, “Grandpa didn’t smoke, but they paid him to do this cartoon ad. But it was very interesting that in those days, they not only didn’t know how bad smoking was, but actually thought it could help marathon swimming.”