1967 Still Stands Including From The Farallons Islands 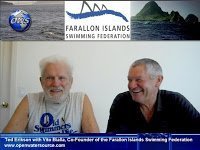 All interesting points in history.

The Night Train Swimmers attempted to replicate Erikson‘s swim from the Farallons Island to the Golden Gate Bridge.

Despite their attempt in increasingly difficult conditions, the six swimmers were rebuffed by a strong flood tide as they reached 7 miles of their goal at the Golden Gate Bridge. 23 miles, they swam, swam hard, bouncing around the cold, rough seas making headway, but the outgoing tide from San Francisco Bay was too much for the team in their tough-fought charity swim on behalf of the Wounded Warrior Project.

Nothing great is easy in the words of Captain Matthew Webb.