2-3 Days On The Mexican High Seas Set For Tomorrow 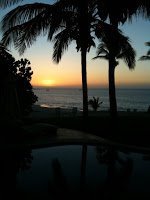 Vito Bialla and his crew of fellow American and Mexican adventurers have gathered in La Paz to begin their 182K swim across the Sea of Cortez.

“This is the exact spot where we start tomorrow. There is much excitement. People are already sleeping on the beach to watch the start. The governor is coming to shoot the starting gun.”

“Nora Toledano is a true folk hero. Water is warm with the seas calm. Our spirits high as we have heated discussions on how long it will take. We estimate between 45 to 75 hours.”

Without a doubt, the sport of open water swimming has entered its Golden Age. The sport has not seen this explosion of courage and audacity on the high seas since 1926 when Olympian Gertrude Ederle swam across the English Channel.

With Lewis Pugh of Great Britain conquering a 1K swim in 35 degree water in Mount Everest, Penny Palfrey of Australia attempting a courageous swim from Oahu to Kauai over the last few weeks, the Sea of Cortez team is right in the middle of making history in this incredible year of global growth and adventure.

Throughout the 2-3 day non-stop relay, the order of swimmers will remain Nora Toledano, Monica Ramiraz, Edna Llorens, Paul Lundgren, Christine Gonzalez and Vito as they constantly rotate one-hour legs, balancing rest with exertion, eating with waiting. “After each leg, each swimmer takes 10 or 15 minutes to get dressed and settled, but then their responsibility is to find the next swimmer. It’s their job to make sure the next swimmer is awake and ready to swim. Getting ready also means watching the swimmer they will follow for at least half an hour so they get used to lighting and the water conditions.”

Follow the team, starting in the wee morning hours on Monday, May 24th here.