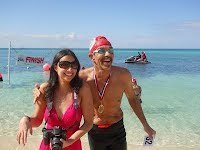 There are going to be a lot of Olympic medalists standing on the shore and swimming along Seven Mile Beach at the upcoming Flowers Sea Swim in the Cayman Islands on June 9th.

But there will be a lot of swimmers hoping to receive one of the randomly awarded prizes at the end of the world’s richest open water swim where over $100,000 in prizes are distributed at the swim’s finish.

We are [giving away] 40 airline tickets to 20 destinations as part of our random prizes. That is one of our big features items, our flagship random prize items
,” said spokesperson Dara Flowers-Burke, daughter of the swim’s namesake (shown both above).

In 2005 in the aftermath of a devastating earthquake that shattered the infrastructure and economy of the island nation, the proceeds of the event went directly to local families in need. “We decided every year we would choose a new local charity, preferably with young people and kids,” explained Flowers to The Observer.

This year’s event that typically sells out at 800 swimmers as in the past, support Feed our Future. “It is an incredible organisation that provides healthy hot lunches for needy school children. They’re a new charity, the only formed last year, and those are the ones we love because we can really give a lot of exposure to them.”