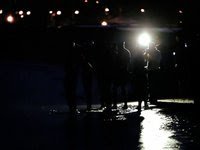 At the halfway point of the 2010 World Open Water Swimming Performance of the Year, over 8,000 online votes have been cast for the 21 nominees.

Each of the individuals nominated in the annual award is a hero or heroine in their own way, symbolizing the best of the sport of open water swimming.

The group – and the sport in general – includes everyone from newcomers who are just getting over their fears of swimming past the waves to incredibly courageous veterans who battle hours (if not days) in cold, harsh, unforgiving oceans.

Throughout the first month, the leaders have changed quite frequently as the votes continue to come in from six continents. If the past years are any indicator, this next month will show continued changes right up to December 31st.

Congratulations to all the nominees.

Photo shows the Ventura Deep Six who were dramatically filmed by Jim Martin.