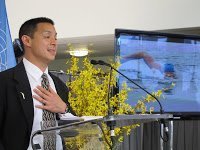 Nominations are being accepted for the 2011 World Open Water Swimming Performance of the Year. Please send nominations to the Nomination Committee here. Nominations are received and judged by experienced open water swimming commentators from five continents.