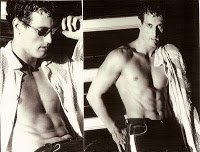 Dr. Stathis Avramidis DipEd, BEd, MSc, PhD is a Visiting Research Fellow at Leeds Metropolitan University in the U.K., an Associate at Hellenic Centre for Disease Control and Prevention in Greece and oft-published author of water safety…who also spends his off-hours as a model and television personality in his native Greece.

International Aquatic History Symposium & Film Festival will bring together a number of personalities from around the world who have created films or books that document history of aquatic sports.

Dr. Avramidis says, “We live in water and we are made by water; 75% of our planet is covered by and 95% of our body is constituted by water. This explains why the history of aquatics is a so intriguing theme for a symposium and a film festival. Let’s meet in the Mecca of Aquatics to witness the extraordinary achievements that we have made from antiquity until today.”

“If you are a fan, coach or historian of aquatic sports, or are a swimmer, diver, water polo player or synchronized swimmer, then you will find the International Aquatic History Symposium & Film Festival to be inspirational, educational and entertaining. Renowned and lesser-known authors, directors, producers and innovative artists will showcase their original artwork and visionary interpretations of exploits and personalities in the aquatics world,” explained Steven Munatones, Editor-in-Chief of the Daily News of Open Water Swimming.