2012 King And Queen Of The Sea Swim Series Announced 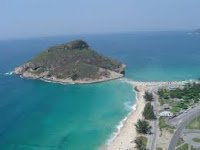 Pedro Rego Monteiro announced new courses for the 2012 King and Queen of the Sea Swim Series and Elite Challenge.

2012 will see the King and Queen of the Sea Swim Series offer three stages with innovations.

The first stage is scheduled for the March 10th with the Sprint, Beach Biathlon and Challenge races. The “Arpoador Sunset” is held in the afternoon with a finish timed to culminate with the most spectacular sunset in all of Brazil at Arpoador Beach.

If the weather is inappropriate for the first stage, the race will be postponed until March 11th. If the Atlantic Ocean is extremely choppy, the course will change to posto 6 on Copacabana Beach.

The second stage, scheduled for September 7th, is on Brazilian Independence Day when the King and Queen of the Sea will return to its roots. Swimmers will swim around the harrowing rock formation that divides the beaches of Recreio and Macumb on the course Pedra do Pontal (see photo above). This is the same location where Luiz Lima was first crowned King of the Sea after completing his unprecedented 35K Leme to Pontal solo swim challenge in 2008 between the two well-known beaches of Leme and Pontal.

The second stage also includes a Beach Biathlon (1K swim + 2K beach run) and a 1K Sprint Swim at Recreio or Macumba depending on the wind.

The third stage is the Leme-Copa course where the swimmers will start at Leme Beach, swim 3.5K, and finish at the world-famous Copacabana Beach. A Beach Biathlon (1K swim + 2K beach run) and a 1K Sprint Swim is also offered.