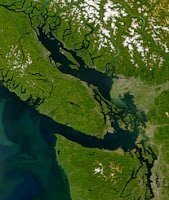 The 35K marathon swim will start from Davis Bay on the Sunshine Coast of Vancouver, Canada on August 11th. More details will be forthcoming.

“The purpose of the swim is to draw attention to the fragile nature of the Salish Sea,” says Brent Hobbs, the swim coordinator. “This region is home to the magnificent Pacific Salmon and many other marine creatures, and we have to become more aware of the need to protect this amazing body of water.”

“Crossing the Salish Sea is an opportunity to bring attention to one of the finest bodies of water in the world through a physical demonstration of endurance,” said four-time swimmer Fin Donnelly.

For more information and to enter the event, contact Jim Close who completed the swim in 2011.

The Salish Sea includes the coastal waterways surrounding southern Vancouver Island and Puget Sound between Canada and the USA. Its major bodies of water are the Strait of Georgia, Strait of Juan de Fuca, and Puget Sound. The north portion of the Salish Sea is in the Canadian province of British Columbia, while the southern portion is in the American state of Washington.