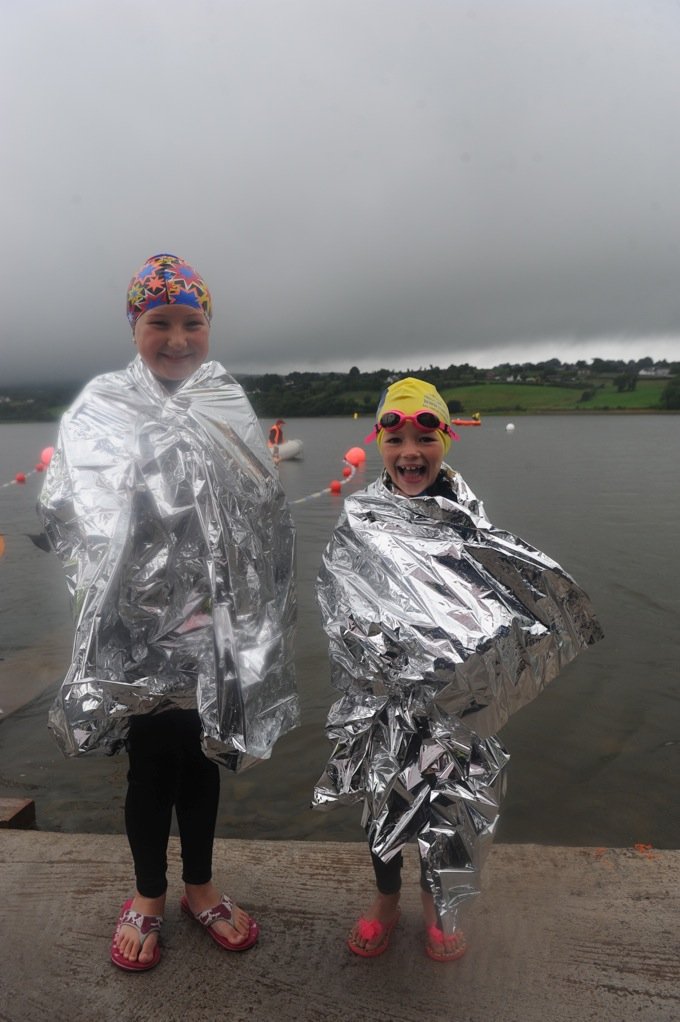 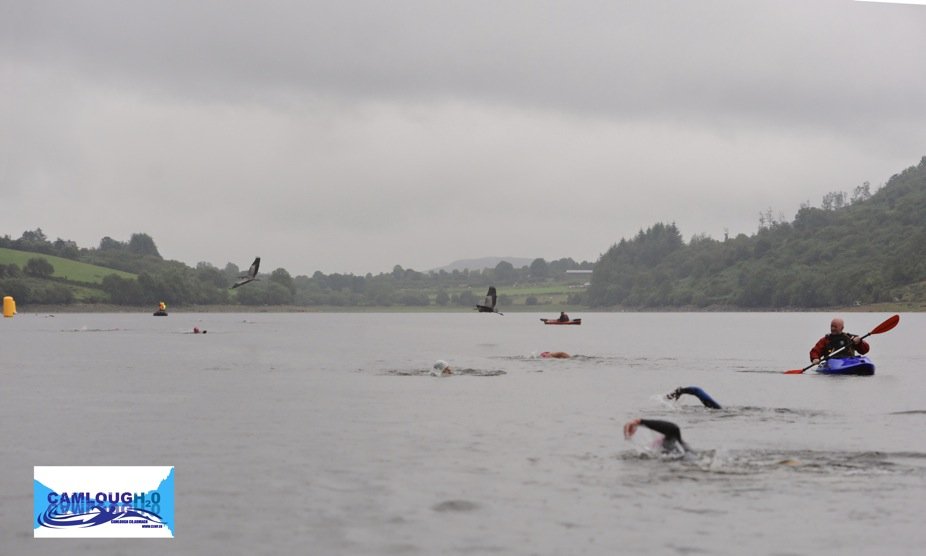 With lowered water levels at Camlough Lake in preparation for the repair works and the upgrade of the facilities, it was initially thought that the 2015 Camlough Lake Water Festival would not go ahead.

This would be its fifth year of the Water Festival, following the efforts of hundreds of swimmers to set a Guinness world record as the longest distance open water relay held in 2009.

But rain filled July and August that led to increased water levels and the CLWF Festival from the 21st to the 23rd August.

Opening on the Friday evening, 38 children participated in a junior Aquathlon (250m swim – 1 km run). Earlier that day, the team realised they would not have a finish arch due to a double booking so the CLWF team booked an inflatable assault course that excited the children when they were told how they would earn their finishers medal.

The Night Swim commenced at 10 pm in darkness, welcoming 108 swimmers to this leisurely 750m swim of the Guinness swim circuit. The stars were out and a crescent moon lit the way.

On the next morning, the sun shone and the Grounded Coffee Dock Morning was in full swing with hot chocolate served and breakfast bums to those who swam out to get them. Events commenced with the junior Try-a-Tri. As part of the safety, CLWF requested that a parent or guardian complete the 150m swim, 3 km bike and 2 km run with their child, but many of them could not keep up. The energy and the smile were contagious. Following the juniors, it was the senior’s turn at Try-a-Tri, yet another start to another journey for many.

In keeping with tradition, Camlough Lake hosted ‘The Lord and Lady of the Lake 2.7 km race. The lowered water levels meant that the course would be difference, but this is open water and shallow water was not ruled out. Saturday’s Irish Open Water Water Polo championships lead to heated a final between North Dublin and Cathal Brugha Belfast with North Dublin glorious in their win.

Swim Sunday as it has become known would be the last of the CLWF events with 250m, 750m, 1 km, 5 km, and 10 km distances open for entry. The water was a hive of activity with kayakers, crafts supporting open water swimmers on their journey.

People travelled from Galway, Mullingar, Dublin, Rush, Belfast, Portadown, and Portrush and from local areas to participate in the festival organised and efficiently ran by a committed CLWF crew.

And so the chocolate factory (Camlough Lake) closes its doors until 2017 as Camlough Lake commences its repair work. Lucky those who got a golden ticket to experience the fun in, on and around the water this weekend and over the past 6 years.

It has been an amazing and all thanks to a wonderful crew, minions oompahloompas included. Events left of this year’s calendar will be sea-based with The Smile Mile held on September 14th 2015, a swim of one mile or any distance up to that in memory of loved ones in Carlingford  Lough, The Christmas Eve dip on December 24th in Carlingford Lough, and the last of the seven H20play series  swims: The Island Dhu 2-way.

Results are posted at  www.championchip.ie.

From Milo McCourt on behalf of the Camlough Lake Water Festival Team: “This year Camlough Lake can again boast itself as the training ground for champions at triathlon, Ironman, Half Ironman, Long Distance Swims, North and English Channel relay and solo successes.

Local North Channel relay team Infinity V made headline news as did world ice kilometer world champion Donna Cooke who competed at the International Ice Swimming Champions held at Wild Water Armagh. Many traveled to warmer climates to swim including our Chairperson Pádraig to China with me for the Yellow River onslaught, the committee to Mallorca for training for the September Ironman, to Russia and Estonia for winter swimming, to various parts of Ireland for open water swimming and triathlons, and Keith and Oonagh Garry to Navia, Spain for the Asturias Cup.

With the dropping water levels in preparation for the repair work, we see a different landscape. The course for the Lord and Lady of the Lake and the 5K and 10K, the oldest swims at Camlough Lake named after Joe McElhaw and our Maria Murphy, will be some what different. For the CLWF team, it’s about swimming and biking and running and water polo regardless of age ability or club affiliation. We are saddened that there will be no events here until 2017, but the sea is not far away and already we are planning the 2016 calendar with a return to Camlough Lake in 2017 firmly in our vision.