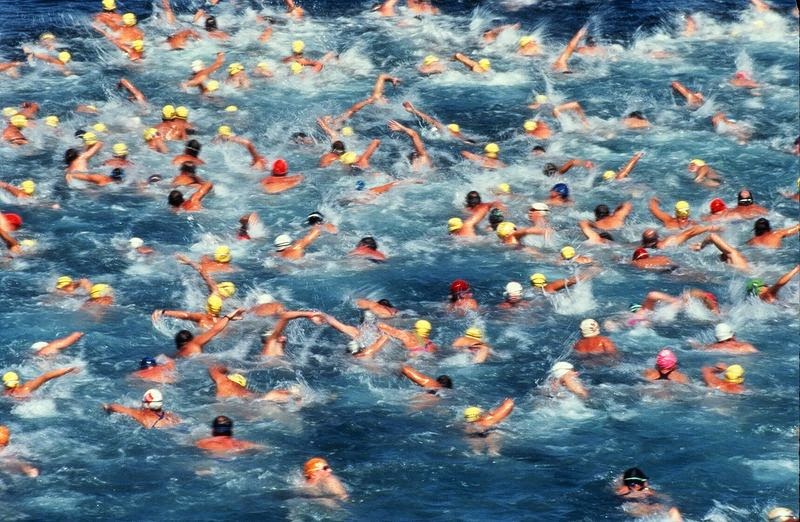 The first La Jolla Rough Water Swim was held in 1916 when it was Charles ‘Chubby’ Shields in 48 minutes.

Swims over the years were cancelled due to sponsorship changes (1935), a polio scare (1948) and shark sightings (1959), but for the most part, the La Jolla Rough Water Swim has stayed consistent over its history.

But its 100th anniversary, scheduled for September 2016, has been postponed.

“Due to the poor ocean water quality and high bacteria levels currently present at La Jolla Cove, we defer the Annual La Jolla Rough Water Swim event until the Cove’s ocean water and beach conditions improve. The safety of our swimmers has always been our primary concern,” writes Bill Perry.

“The Committee feels that to subject our entrants to the Cove’s poor ocean water quality this year would be irresponsible and contrary to the high standards of this 100-year-old event. We have always strived to provide a first class aquatic event for all members of the family and we don’t feel that would be possible this year considering the current conditions at La Jolla Cove.”

“Additionally, sea lions have taken up residence on the beach and rock configurations surrounding La Jolla Cove in such numbers that swimmers have begun entering the water from other beaches, to avoid the fecal pollution and unpleasant smell, as well as the aggressive behavior of the animals during their recent mating season,” reports Anne Cleveland, a Cove regular.

Photo shows the start of the 3-mile Gatorman, one of the premier events in La Jolla.