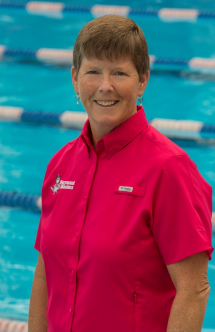 The United States Masters Swimming National Coaches Clinic will be held between November 11th-13th in the College of San Mateo, California. The schedule is as follows:

Speakers:
Cokie Lepinski is Head Coach and founder of Swymnut Masters who writes regularly for SWIMMER Magazine and U.S. Masters Swimming. She was the 2014 USMS Coach of the Year who authored an e-book, There’s A Drill For That. Before becoming a coach, she had a 32-year career in law enforcement where she worked in 911, specialized in instructor and curriculum development and spent 15 years as a Hostage Negotiator.

Sheila Taormina is the only woman in history to have competed at the Olympics in three different sports: swimming, triathlon, and modern pentathlon. She has served as a motivational speaker, coach and clinician who created the Swim Speed series of books.

Rod Havriluk, Ph.D. is president of Swimming Technology Research and a biomechanist who specializes in swimming technique instruction and analysis and has coached swimming at all levels – from age group to NCAA Division I. He serves on the advisory board for the Counsilman Center for the Science of Swimming; the educational committee of the International Swim Coaches Association; the editorial board for the Journal of Swimming Research; and the review board of numerous sport science journals.

His research focuses on optimizing technique, preventing shoulder injuries, and accelerating skill learning where he has presented his findings at many conferences and published in many journals. He has conducted clinics in many countries and has worked with thousands of swimmers and triathletes, including Olympians and world record holders.

Swimming World Magazine named him as one of the top ten people with the greatest impact on swimming in 2015. He explains what he will discuss at the clinic. “Much of the conventional wisdom about swimming technique is based on modeling top swimmers. This approach is seriously flawed because even the fastest swimmers have technique limitations and often excel because of their size, strength, and physiology. This presentation will explain many of the common technique misconceptions, the science behind effective technique elements, and the learning strategies that accelerate skill learning.”

Coach Sickie aka Ronald Marcikic is the founding Director and Head Coach of the University of California, San Diego Masters Sports program. This long-standing program includes 300+ athletes in 25 weekly swimming, running and triathlon workouts, with a coaching staff of 13 professional coaches. He was a top competitive swimmer through college and started coaching in the Michigan country club league in 1966. Although coaching masters is his first love, Coach Sickie has worked with age group, high school and college swimmers since 1967.

His first masters programs between 1977 and 1982 in San Diego were the MRC Masters, Miramar Naval Air Station Masters, JCC Masters, Mission Valley Masters and the Clairemont Masters swimming programs. These programs were all rolled into one swimming group in 1983.

Dr. John Mullen, DPT, CSCS is a renowned expert and speaker in sports training and rehabilitation. He received his Doctorate in Physical Therapy at USC, as well as the Josette Antonelli Division Service Scholarship, Order of the Golden Cane, and the Order of Areté. At USC, he also performed research on swimming biomechanics and lung adaptations in swimming training. Dr. Mullen has worked with multiple professional and Olympic athletes, helping them earn Olympic medals.

Ernie Maglischo, Ph.D. retired from coaching in 1998 after 35 years during which he coached at both the college and club levels. Over 29 years of college coaching, his teams won a total of 13 NCAA Division II Championships and 19 Conference Championships at three different universities. He was selected NCAA Division II Swimming Coach of the Year on several occasions. He was also the 1991 recipient of the National Collegiate and Scholastic Swimming Award, presented by the College Swimming Coaches Association.

Ernie has authored or co‐authored seven textbooks and three booklets on various aspects of competitive swimming. He also co‐authored two booklets on nutrition for athletes. His latest publications are Volumes 1 and 2 of A Primer for Swimming Coaches. Volume 1 is titled Physiological Foundations and Volume 2 is Biomechanical Foundations. Additionally, he has authored or co‐authored over 47 periodical publications including reports of original biomechanical and physiological research.