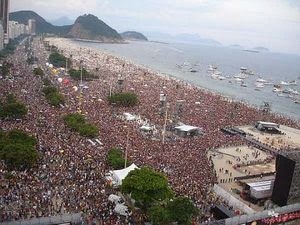 Copacabana Beach in Rio de Janeiro, Brazil is a 4 km beach, one of the most famous beaches in the world.

As well as annual New Year’s Day celebrations that attract millions of revelers, Copacabana Beach will also be site of the Olympic 10K Marathon Swim at the 2016 Summer Olympic Games.

It is conservatively estimated that a minimum of 300,000 spectators will gather on the famous beachfront and boardwalk during the Olympics to watch the swimmers.