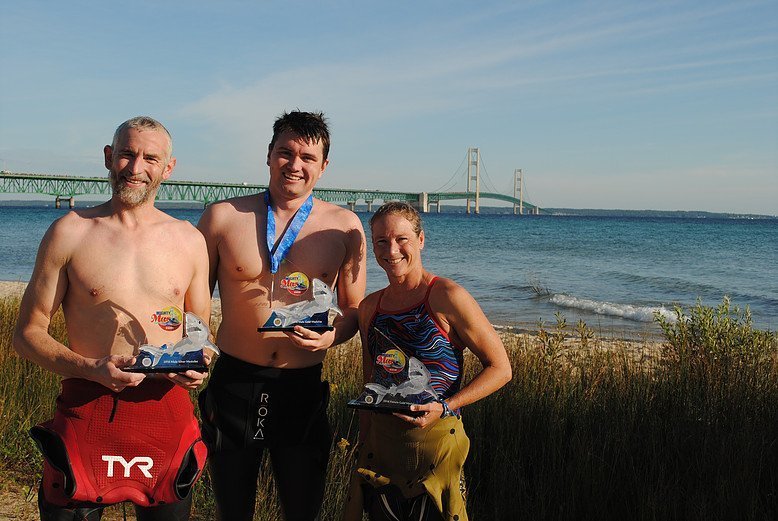 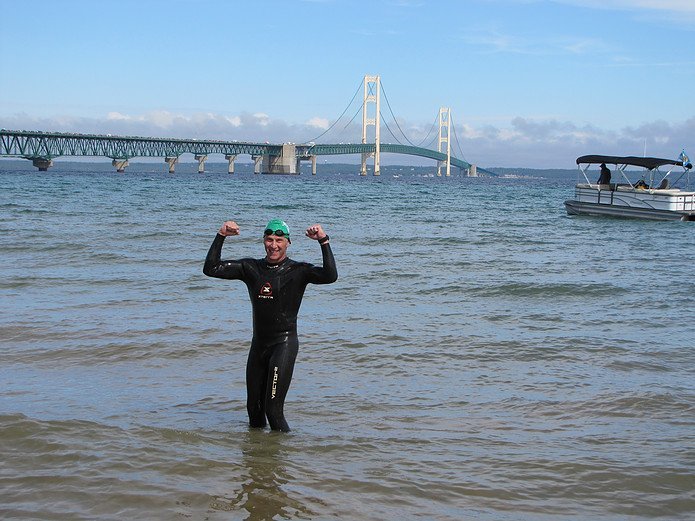 Changes abound for the 2017 Mighty Mac Swim, a charity swim that gave US$20,000 first prize awards in its 2016 edition to both Chris Thompson and Amanda Stevens [see results below].

Pre-qualification and registration opens today at 6:00 am local time. The Mighty Mac Swim is an annual race across Michigan’s Straits of Mackinac, recognized as the Michigan Open Water Championship by both the World Open Water Swimming Series and the Global Swim Series.

Race founder Jim Dreyer says, “Habitat for Humanity of Michigan remains the swim’s beneficiary and also represents the event’s most significant change. Those who ultimately stand to benefit are Michigan military veterans and first responders. Funds raised through the Mighty Mac Swim are now specifically targeted to building a home for the family of a ‘deserving American hero,’ and funding other home improvement projects for veterans and first responders across the state through Habitat for Humanity of Michigan.

Mighty Mac Swim proceeds will at the very least completely frame a new home for one of Michigan’s American heroes. Our hope however, is to entirely fund the completion of that home.”

While the fundraising goal is lofty, the fundraising minimum for participating swimmers has been lowered from US$5,000 to US$3,000 with the expectation of drawing more participants. The Mighty Mac Swim has raised over US$630,000 in its first two years.

The Mighty Mac Swim will take place on August 12th 2017. “Swimmers may dedicate their swim in honor or in memory of a person with service in the U.S. military or as a first responder. 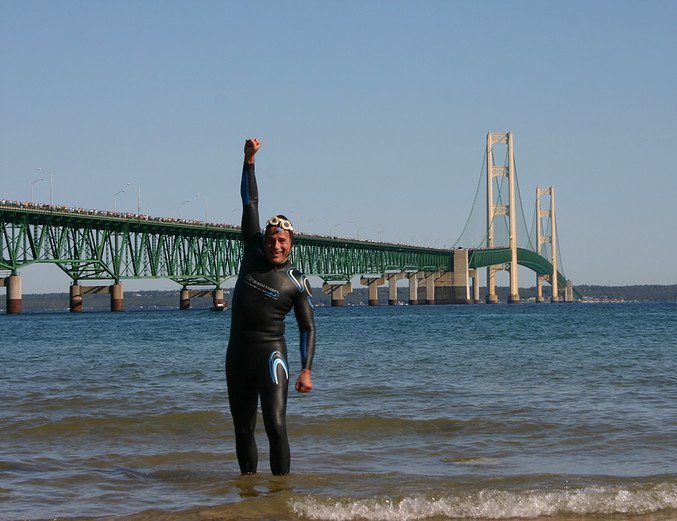 In an unprecedented event called HouseBoat for Heroes, I will attempt to tow building supplies on a barge for over four miles across the Straits of Mackinac on August 5th. All totaled, the weight of the load will be approximately 18 tons. Once the cargo arrives at the dock of the Mackinac Bridge Authority, the home will be framed by volunteers who are likely to include some Mighty Mac swimmers near the new finish line in Bridge View Park, also near the St. Ignace Michigan State Police Post.

The Mighty Mac Build, as it is called, is scheduled for August 8th, and will set the stage for an incredible packaged experience for swimmers. After finishing a most memorable swim, whether to race, just challenge themselves, or to simply enjoy the beauty, the athletes will get to meet veterans or first responders and their families for which the swimmer has significantly impacted their lives … just as the new homeowner has served and protected ours with valor.

Furthermore, the framed house will be positioned at the finish line so swimmers will see for themselves what their fundraising has accomplished. Swimmers are then invited to tour the home and write inspirational messages to the new homeowner on the home’s framework … a positive message that will remain forever, just as the event’s experiences will create everlasting memories.”

“We are so grateful for the swimmers and their support of Habitat for Humanity,” said Sandra Pearson, Habitat for Humanity of Michigan President and CEO. “It is so meaningful for us to hear the swimmers say that they were thinking about Habitat and helping others while they were competing, and I know that feeling will be amplified this year as we focus our efforts on providing safe and affordable housing for veterans and first responders. There is a huge need of housing for veterans in Michigan, and this event will help raise awareness of that need.”

The Mighty Mac Swim course allow swimmers to get up close with the landmark Mackinac Bridge. The new route in 2017 will be south to north with a 50-yard-wide swimming lane between the west side of the bridge and the support boats. “While highly unique trophies and finisher’s medals will be awarded and the top fundraiser will win a great travel award, the greatest reward for swimmers is knowing that they are responsible for providing a home to an American hero,” Dreyer said.

For more information on the Mighty Mac Swim and the weeklong events leading up to the race, visit www.MightyMacSwim.com.