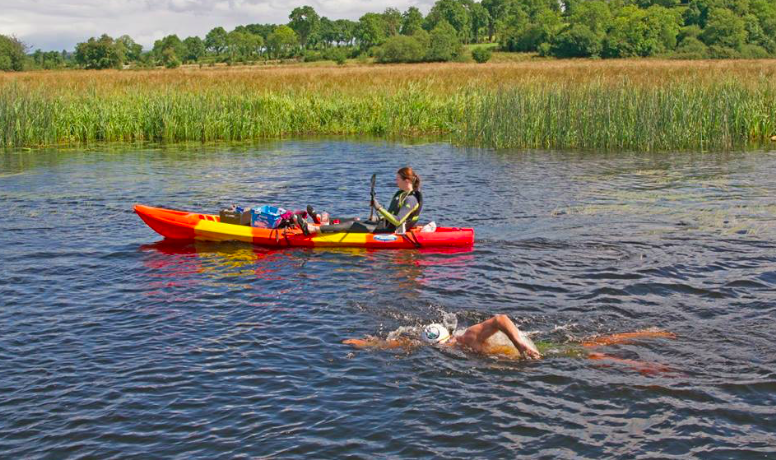 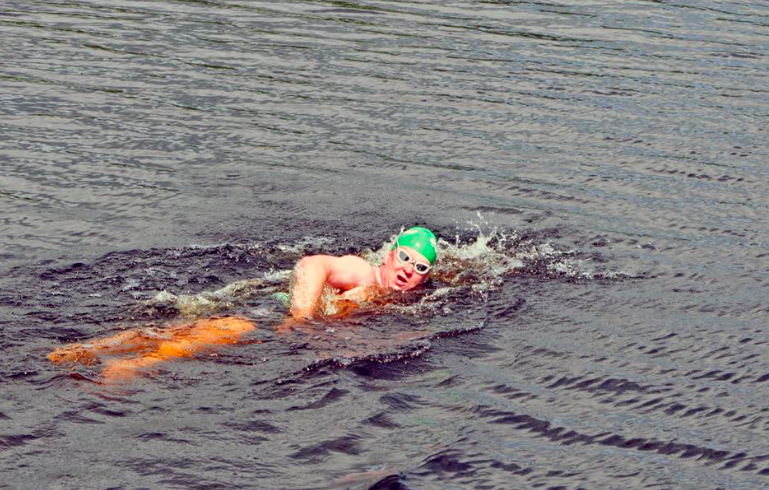 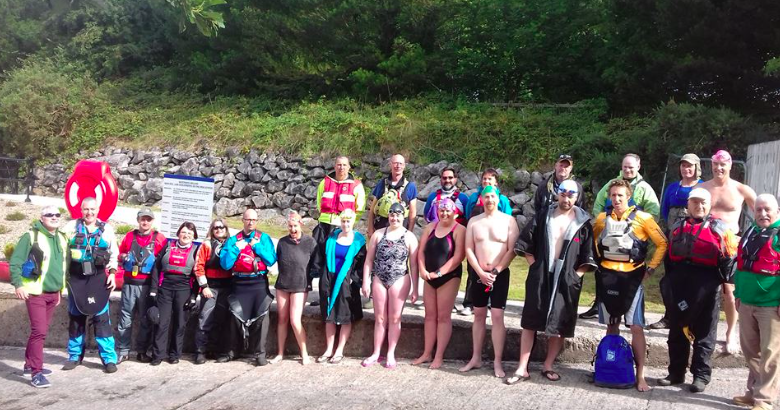 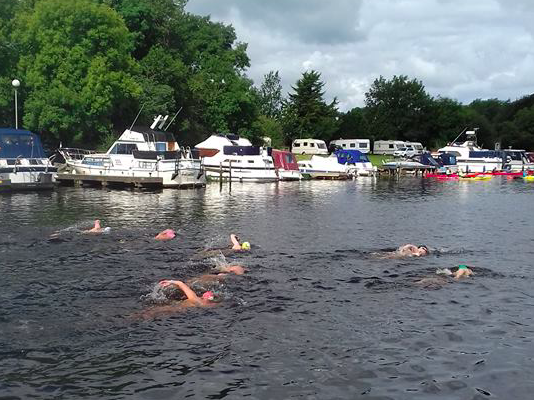 The 26th annual ILDSA Lough Erne 25 km and 17 km National Championship took place on August 5th to some of the best weather of recent years, one of the biggest entry lists, and to a year of firsts including course records, championship records, and the first relay in the event’s history.

Lough Erne is the name of two connected lakes in Fermanagh, Northern Ireland (Upper Lough and the lower Broad Lough). It is the second biggest lake system in Northern Ireland and the fourth in Ireland. The National Championship spans a distance of 25 km from Naan Island to the centre of the historic town of Enniskillen.

It was a very early start for the 25 km swimmers who met at Carrybridge for registration and where they were boated off to the jetty on Naan Island for an 8:00 am start. There was great excitement in the air as Anthony Sloman, Brendan O’Brien, Bernard Sweeney, Anna Carin-Nordin and our first relay with Colin Lynsey, Gairoid Derry and Aidan Walsh took to the water with their kayakers from the Erne Paddlers and support boats and started their swim.

While Anthony Sloman was in the lead for the 25 km swimmers, it was time to head off to Bellanaleck Marina to kick off the 5 km swimmers, a new distance for this year’s Lough Erne event. It was more a reinvention of the Couch to 5 km Swim with Maureen McCoy and Paul McCambridge in partnership with Waterways Ireland. After the registration and the briefing were complete, the swimmers were transferred to Culkey Jetty where the start of the 5 km swim was. It was clear that the good weather aided the swimmers going at a fantastic pace. It wasn’t long before the last transfer to Culkey was completed and Ciara Doran was cheered on as the leader from both the 17 km and 25 km swim. With all swimmers in the water, it was a race to the finish at the Lakeland Forum to cheer and record the swimmers coming in.

All in all, it was a successful day with 36 swimmers taking to the water over three distances. All the swimmers completed the swim. Ciara Doran set a new Irish ladies record for the 17 km swim in a time of 3:56:18, a phenomenal achievement by any standard, even more so for a 17-year-old. The course record for the 25 km was broken by Bernard Sweeney in a time of 6:45:55, eclipsing the previous record of 6:59:58 set by Aidan Hickey in 2015. The Armagh Pike Kickers relay with Colin Lynsey, Aidan Walsh and Gairoid Derry set the bar high for the first 25 km relay with a time of 6:57:22. It was fantastic to see Paul Manning, a Lough Erne veteran, return to the 17 km and take the title again in a time of 4:26:28.

A special mention must be given to John Boyle who over 6 weeks worked with inner city at risk youth. Boyle, in conjunction with the Dublin Distance Dippers and in partnership with Swim Ireland and Waterways Ireland, worked hard to build the confidence of these children with open water swimming. A big thank you to Swim Ulster president Bettie Beattie who, along with her husband Jack, attended the swim cheering on the swimmers, helping with the presentation of the awards. Although ILDSA President Billy Wallace would have loved to have been able to attend the event, he was certainly there in spirit. With the incredible success of the Couch to 5 km Swim organised by Maureen McCoy and Paul McCambridge, it is clear that the future is bright for open water long distance swimming in Ireland.