28 or 45, Either Way Channel Of Bones Is Extremely Tough 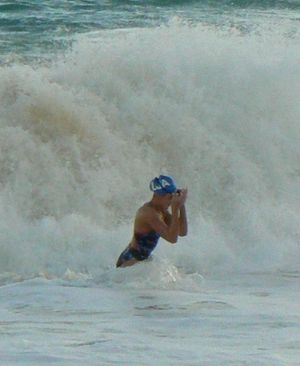 Perhaps it has to do with the marine life that includes all kinds of whales, sharks, and jellyfish? But it definitely has to do with the ocean swells that can be higher than the mast of the boat, the massive surf at the start on Molokai Island and the finish on Oahu and the winds that whip across the Pacific Ocean to create the most arduous washing machine effect in open water swimmingdom.

It is the first relay crossing of the Molokai Channel, the inaugural Ka’iwi Channel Swim that will begin at 6:15 am local time in Hawaii today.

The 28-mile, 45 km ocean swimming relay, sanctioned by the World Open Water Swimming Association, is an island-to-island bear of a race between the Hawaiian islands of Molokai and Oahu. Co-race director Steve Haumschild describes Ka’iwi Channel Swim as “the most insane open water swim event on the planet. The race is like no other.” 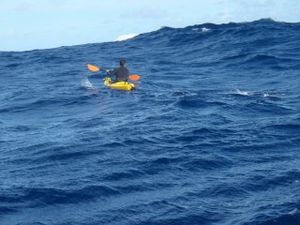 The conditions are always iffy between the tiny little dots of humanity in the biggest ocean on Planet Earth. But Haumschild is confident today’s race will be safe and a challenge like no other relay race. “We are stoked. We had quite a few inquires about participating in this inaugural event. However due to the lack of experience, we elected to only accept 2 teams. We were initially hoping to host over 10 teams this year, but we opted for safety over volume. [Co-event director] Jeff [Kozlovich] and I are really excited to be doing an event of this caliber and hope that this takes off to bring more attention to the sport, participants and Kaiwi.”

The Ka’iwi Channel that separates the island masses created from volcanoes coming up from the ocean floor means the Channel of Bones. Ka means the”and iwi means“bone”which is symbolic of life and old age. And after this 28-mile rough water relay crossing, the swimmers are definitely going to age, but with a new look on life. Their skin will be ravaged by the sun, wind, and swells, but their smiles on the finish on Sandy Beach will be wide and bright after an entire day of battling in the Channel of Bones.

Follow via Facebook here. If there is any pressure to maintain the safety of swimmers on an open water event, this is it. But there are no better and more experienced race directors in this part of the world than Steve Haumschild and Jeff Kozlovich. They have more hours escorting and protecting swimmers in this channel like no other pair on the planet.

This will be the first swimming relay across the Channel of Bones, but the outrigger canoeing races have been going on for 4 decades:

And after 28 miles of swimming across turbulent ocean, the swimmers have to finish on Sandy Beach, a famed body surfing beach on the eastern shore of Oahu. Photo above shows Mackenzie Miller finishing up on the shore of Sandy Beach after her Molokai Channel crossing of