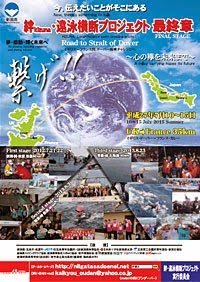 In Japan, the Kizuna Enei Oudan Project 2015 is underway.

The Kizuna Enei Oudan Project includes 3 channel swims. The first is Niigata on the Japanese mainland to Sado Island across the Sado Channel, the second is between Aomori Prefecture and Hokkaido across the Tsugaru Channel, and the third is a one-way crossing of the English Channel.

While the 33.7 km English Channel and 19.5 km Tsugaru Channel are well-known, the Sado Channel is a tough 40 km crossing on the western seaboard of Japan. Sado Island is a remote island where Japanese political exiles were sent for nearly 1,000 years beginning in the 8th century. 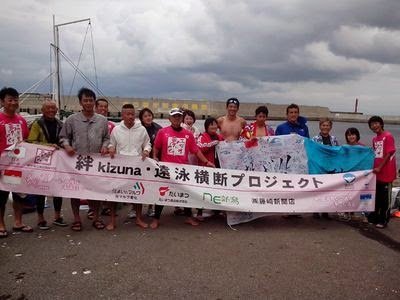 The island was the place of the harshest exile throughout a millennium where many anti-government intellectuals were banished and never returned. Similar to the locations of many other prison island swims around the world, the remote island prison has now been transformed itself into a tourist destination and channel swimming goal.

For more information on the triple-channel adventure by the Kizuna Enei Oudan Project, visit here [in Japanese].