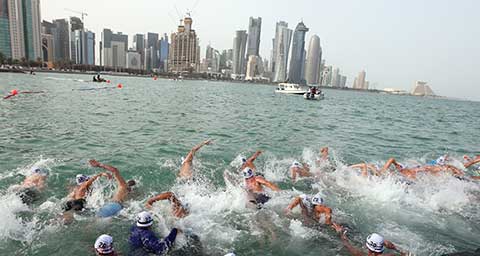 Qatar is among the seven countries preparing bids to host the FINA World Swimming Championships in either 2021 or 2023.

Since FINA’s own maximum water temperature rule is 31°C, it will be interesting to see how – or where – the open water events will be held.

Photos courtesy of Philip Emslie are from the Qatar Open Water Swimming Championships held along The Corniche in Doha. The Corniche is usually off limits for recreational swimming, but the coastline course was site of 1.5 km, 2 km and 3 km races in May when the air temperature 40°C and the water temperature was 27°C.