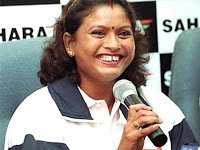 Bula Chowdhury Chakraborty is a name that has joined the possible Ocean’s Seven list of swimmers.*

Bula is celebrated in her home country in India where she won the Arjuna Award in 1999 and the Padma Shri in 2009. In addition to the Oceans Seven swims, she has crossed the 33-mile (53K) Palk Strait from Sri Lanka to India in nearly 14 hours in 2004, the Tiranian Sea in Italy, the Toroneos Gulf in Greece in 2002. In 2003, she swam across Cooks Straits in New Zealand. Bula Chowdhary completed the swim through the Strait of Gibraltar in a world record time at 3 hours and 35 minutes.