400 Just For Kicks And Time 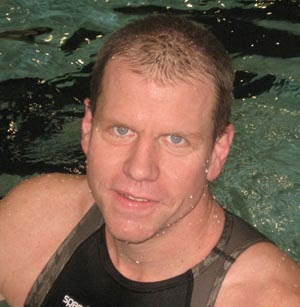 It is often said that the fastest swimmers also have the fastest kicks. It has been largely true since the days of Duke Kahanamoku and continues on to the era of Natalie Coughlin and Ryan Lochte.

Greta Andersen and Penny Dean kicked hard during their marathon swims. There was no let-up with these women.

Similarly, Chris Stevenson, a 48-year-old world record holder from the Virginia Masters Swim Team, is living proof that a fast kick correlates to fast swimming. He is the U.S. Masters Swimming national record holder for a 400-yard kick in 4 minutes 52.16 seconds.

U.S. Masters Swimming hosts a 400-yard kick for time. The rules include:

* Must use a kickboard
* No “stroking” into the wall
* No flip turns are allowed
* Two kickers per lane maximum are allowed with no circle swimming
* Can be done in any 25-yard pool
* Must be completed between December 1st and December 31st 2013
* Entry must be submitted online or received by mail by January 17th 2014
* Swimmers who change age groups in December may enter and pay twice, but they must kick the 400 yards twice, once in each age group
* There must be one stopwatch per swimmer
* No fins are allowed
* Entry fee is $10 (event t-shirt is $20)
* Register at Club Assistant (search for ‘400 Kick For Time’ under Events)

Preliminary results will be pasted on the Pacific Masters website by January 22nd 2014. All corrections must be send to event director Marcia Benjamin during those two weeks. Final results will be posted approximately one week later.