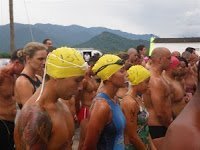 Travessia 14 Bis is one of the longest-running and longest marathon swims in South America. The 24 km crossing is held in the Bertioga Channel between the island of Santo Amaro (Guaruja) and the Brazilian mainland near São Paulo, Brazil.

The 45th edition is always supported by the Air Force Command Center Air Base Santos with the support of the City of Bertioga, Brazilian Navy, Clube de Nadadores de Maratonas Aquáticas, the Associação dos Cavaleiros de Bertioga and a number of volunteers.

In the last four years, Glauco Rangel has won twice and finished a close second twice. He and his fellow competitors are shown before today’s race.