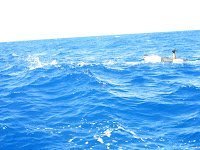 “She is amazing. I can’t imagine anyone finishing under those conditions,” said Lynn Kubasek, one of the support crew of Penny Palfrey’s Catalina Channel crossing yesterday. “It was a bumpy ride over to Catalina Island and it was a very bumpy swim back over [to the mainland]. We had things flying across the boat during the swim. Mother Nature was definitely not nice.”

“The water temperature started at 66°F (18.8°C), then it dropped to 61°F (16.1°C) mid-channel and by the time she finished it was 53-54°F (12°C). It was so cold that I am so amazed at her success. Getting that one crossing done was tough. She had such a hard shiver afterwards, but she was in pretty good spirits considering that she is number 41 in the Triple Crown of Open Water Swimming.”

On the same day, International Swimming Hall of Fame inductee Nora Toledano was also coaching 47-year-old Alfredo Isaias Carreras of Mexico across the channel. “I could see the others most of the time at the sea until the fog came. My swimmer swam for 10 hours and 10 minutes. He was 1.9 miles from the shore, but he was so cold we decided not take the risk so we suspended the swim.”

Likewise, the Night Train Swimmers who were preparing for their Mexican American Unity Swim experienced the same tough conditions on their 10:23 relay crossing. Team captain Vito Bialla remarked, “That water kept getting colder and colder . It was down to 53.6°F (12°C) at the end. It was too cold for a solo swimmer.”

Which proves how amazing Penny’s Triple Crown crossing really was.

Photo shows Penny in her first marathon swim attempt this year across the 72-mile (115K) Kaieiewaho Channel between the islands of Oahu and Kauai in Hawaii that ended in indescribable pain and suffering due to massive Portuguese Man-o-War stings.