Rachel Golub (shown on left) announced an audacious plan to swim with fellow extreme adventurers Cristian Vergara, Scott Lautman and Patricia Sener, all experienced open water swimmers, in a joint attempt to cross the treacherous 3-mile Beagle Channel between Chile and Argentina sometime during the third week of January 2010. 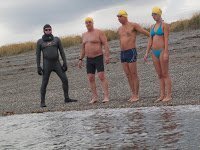 A swim not lightly attempted with life-threatening danger possible with every arm stroke given the ever-changing conditions, the fearless group is trained well for a sequel to their 2009 swim across the Strait of Magellan (photo on left at start).

With support provided by the Chilean Armada and Claudia Molkenbuhr of Chiledeportes, Cristian, Rachel, Scott and Patricia plan to be swimming against currents in 4°C waters for at least one hour during their crossing from Puerto Williams, Cabo de Hornos, Chile -the southernmost town in the world – to Ushuaia, Argentina, on the Big Island of Tierra del Fuego.

But, despite the obstacles, Cristian exudes confidence. “Having swum for nearly two hours in those conditions on our Strait of Magellan crossing (passage between the Pacific and Atlantic Oceans), but it is considered a difficult route to navigate because of the unpredictable , we’re confident that we’ll be able to succeed in the Beagle Channel, though it certainly won’t be any less physically or mentally challenging.”

Sadly, the reach of man will be experienced even in this remote swim. Raquel observed, “We are really hoping to find clean waters there, but pollution taints even the most remote wilderness these days, and the Beagle Channel sees plenty of shipping traffic. I think I speak for all of us when I say that this swim is about re-asserting our connection with our environment, albeit in a rather extreme manner.”

Frigid water, strong currents, unpredictable weather and complicated logistics are some of the extreme obstacles to overcome, but it is the uniquely ferocious Williwaw gusts (up to 200 knots) can truly make things dangerous for the intrepid group.

Patricia commented on the training – both physical and mental – that she has done in preparation for the challenge. “Cristian and I been training cold water for about ten years, gradually increasing cold exposure. So our bodies have had a long time to figure out how to acclimate. Rachel is very different. She is relatively new to our group, but has an innate ability to tolerate cold water extremely well.”

“All this ties in with the mental. As I become more comfortable with extreme cold, the easier it is to use visualization techniques. Every day, I tell myself I am a warrior. I can do this. I envision myself during the swim, but more importantly, I visualize myself FINISHING the swim.”

“I will be the slowest swimmer, and therefore in the water the longest, so I have also taken extra precautions in terms of researching and bringing the proper warm-up gear in to prepare for extreme hypothermia scenario. Having trained in the Straits of Magellan last year, I have a sense of what the Beagle will be like, so I feel pretty confident that I know exactly what I’ll be facing.”