4Ocean Makes a Difference 1 Pound at a Time 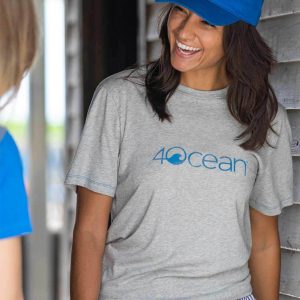 4Ocean Makes a Difference 1 Pound at a Time

4Ocean Apparel Company, founded 3 years ago in Boca Raton, Florida, has an innovation program to help clean the world’s oceans.

4Ocean pays fishermen from all across the world to go out on the ocean and collect plastic by their boats. Some places they have treated include Bali, Haiti, Guatemala, and Florida.

The company has achieved phenomenal successes in all locations that they have treated, as seen in the beaches’ before and after photos on 4Ocean’s social media.

Since 2017, the company has pulled a whopping 8,600,500 pounds of trash, and counting. 4Ocean uses the hundreds of pounds of plastic that they find to melt, bleach, and make into stylish bracelets that can be worn by anyone of any age or gender. Every bracelet is adjustable to fit any wrist.

According to 4Ocean, each bracelet sold pulls a pound of plastic from the ocean. Not only are their bracelets trendy, but their mugs, hats, reusable straws, and t-shirts are also popular items. When consumers are no longer using their 4Ocean products, the company will gladly take the product back to remake it into another sellable good as part of their Closed-Loop Program.

There really is a bracelet for everyone: each month, the company releases a new color to bring attention to a different marine animal that is at risk of extinction. Their monthly goal is to raise awareness around each species and inspire people to learn more about what they can do to help the cause.

Every year, 4Ocean hosts their famous Clean Ocean Movements based in the beaches of Florida. These events, including Sea Turtle Day, Daytona Beach 4Ocean Community Cleanup, and the Manatee Fest strive to gather people of all different ages and backgrounds and raise awareness in a fun and meaningful way. These events have attracted the attention of hundreds of individuals and their attendance has increased from 60 to 1,300 participants in just one year.

4Ocean’s Sea Turtle day includes fun activities such as face painting and watching live animal feedings for the kids, or hearing from experts on plankton and health of our ocean or life under the sand. Event goers are even given the opportunity to wave to or take pictures with Luna, the green sea turtle. This event happens annually in early March.

The Beach Cleanup on Daytona Beach is also one of 4Ocean’s successful events. Participants are able to borrow 4Ocean gear such as gloves and buckets to collect all ocean trash they can find. The mission is more than just what’s on the surface: most of the problem is found below the sand, so digging up plastic is what it’s all about. Each participant will receive a free 4Ocean bracelet in return for what they collect.

4Ocean also offers volunteer opportunities to inspire teens and other individuals to help their cause. Volunteers usually live in Florida and are willing to help set up for events, sort through trash that has been collected, and spend the day on the beach welcoming participants and answering questions.

4Ocean thanks supporters and volunteers who have helped make their mission possible. The simplest way to help them out is to purchase one of their bracelets and pull your pound of trash.