Courtesy of Pedro Ordenes, Bonifacio Channel, France – Italy. On June 27th, 13-year-old Anaya Khanzode, 17-year-old Mitali Khanzode, 15-year-old Saumitr Dikhit, 17-year-old Hana Lip, and 17-year-old Riley Lim, all of northern California successfully completed a 16 km cross-border tandem crossing of the Bonifacio Channel. Their cross-border swim was between the French island of Corsica and the town of Santa Theresa de Gallura on Sardegna (Sardinia), Italy. Pedro Ordenes of Water World Swim reported, “The teenagers trained for a year under coaches Mike Lockwood and Jake Glodowski under the supervision of coach Kathy Winkler and myself. The tandem crossing started on the shores of Corsica (coordinates 41 deg 23′ 11.52″ N – 09 deg 09″ 39.44 E) at 7:58 am and they all finished on the beach Spiaggia Rena Bianca (41 deg 14′ 42.41″ N – 09 deg 11″ 91E).  They swam 15.87 km in the 23°C water. Anaya, Mitali and Hana finished together in 4 hours 25 minutes 59 minutes while Riley and Saumitr finished together in 4 hours 29 minutes 16 seconds. Their feeding schedule was right on plan. They all feed and drank together while eggbeatering off the escort boat. 45 minutes into the swim, they had Carb-Pro and non-caffeinated Gu; an hour 16 minutes into the swim, they drank Carb-Pro; after 1 hour 48 minutes, they had Carb-Pro and their choice of either caffeinated or non-caffeinated Gu; after 2 hours 20 minutes, they had Carb-Pro only; after 2 hours 51 minutes, they drank Carb-Pro and had a choice between caffeinated or non-caffeinated Gu; after 3 hours 25 minutes, they took Carb-Pro only; and 3 hours 59 minutes into the swim, they had their choice of Carb-Pro and caffeinated or non-caffeinated Gu. The observer and coach was Lockwood whose crossing report by corroborated by escort pilot and Captain Tommaso Muntoni from Santa Teresa Gallura, Italy.  Lockwood described the crossing, “The Bonifacio Channel swim, performed by Anaya, Mitali, Saumitr, Hana and Riley, was the culmination of 9 months of preparation that began in October 2018.  From October to December 2018, the athletes took on a light training schedule to test their commitment to this venture.  The families and coaches wanted to make sure that the kids would be able to manage their time effectively enough to take on a 4-month training program that would coincide with the most difficult time in their school year. Satisfied that the kids would be able to manage their time, their Water World Swim coaches designed a training program that began in early March and continued to June 26th, one day prior to their swim. The official 4-month training program was multifaceted.  The swimmers practiced all aspects of channel swimming. They practiced open water feeding, swimming as a group, sighting, temperature acclimation, stroke technique as well as strength and stamina building.  We were also fortunate to practice dodging jellyfish in the waters off of Rena Bianca beach in the days leading up to their swim. The swimmers were physically and mentally prepared to face their challenge.  While the swimmers worked flawlessly as a team during the swim from Corsica to Rena Bianca in Sardinia, each swimmer faced and overcame their own personal struggles during the 4 and a half hours that they were in the water. 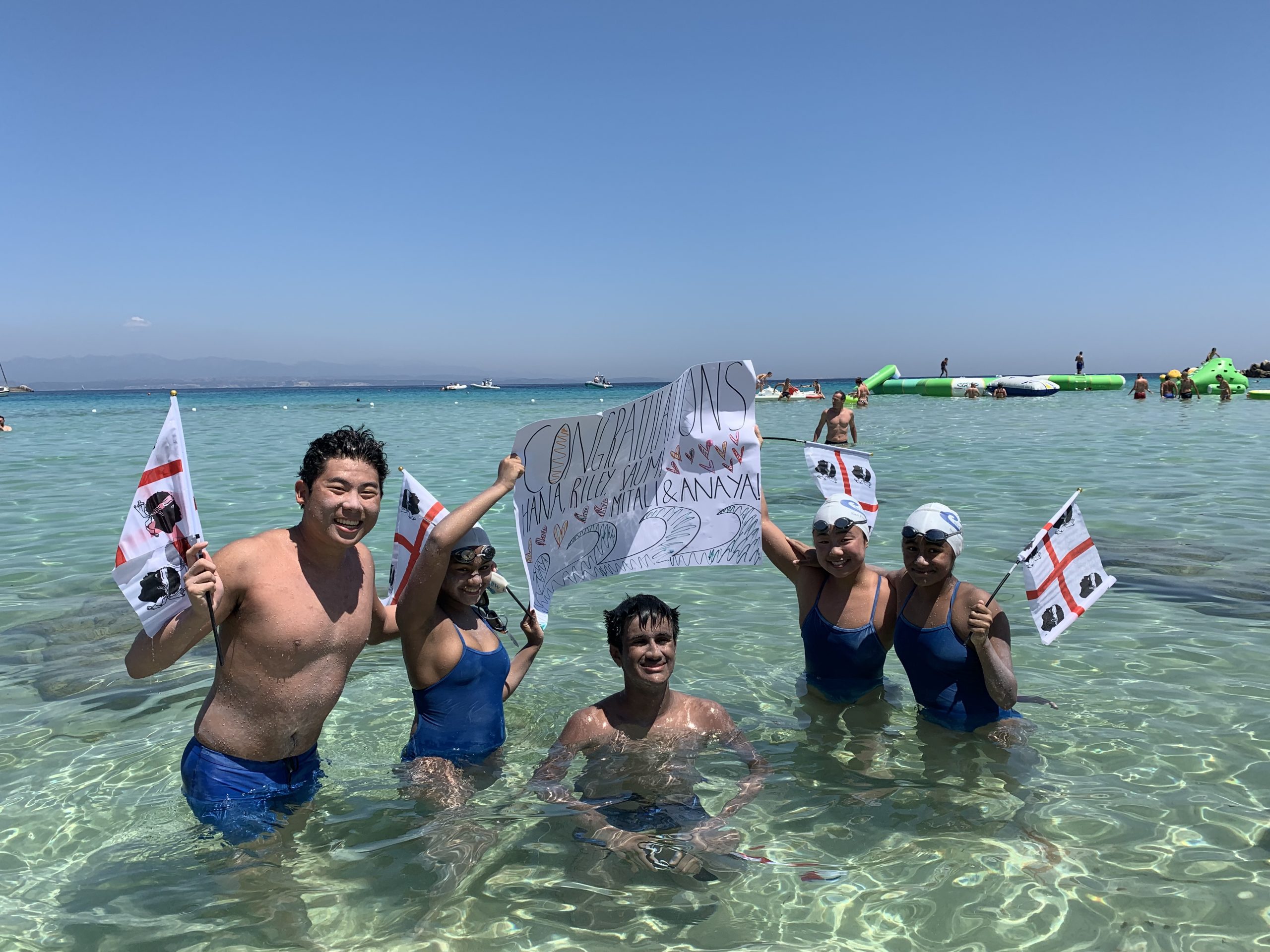 Riley and Hana displayed true leadership.  Anaya showed resilience.  Saumitr persevered and Mitali’s strategic thinking kept the team’s time under 5 hours despite a rough, head-on ebb tide over the last 3 kilometers. I will carry these memories with me for the rest of my life.” For more information, visit www.waterworldswim.com. Copyright © 2008 – 2019 by World Open Water Swimming Association