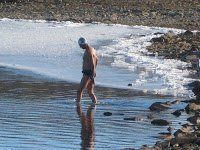 With so many individuals getting into open water swimming, especially members of the Baby Boom generation, certain designations like the Half Century Club and divisions over 50 years old are booming with new participants.

From a downward perspective, the open water swimming community is improving is acclimatization to ever decreasing water temperatures for ever longer periods of time. Previously, the community was acknowledged to be able to handle colder and colder water.

From an upward perspective, the open water swimming community is getting older and faster as it grows larger accomplishing more longer and doing it more enjoyably. Previously, an individual like Doc Counsilman was globally celebrated as the oldest man to cross the English Channel (at the age of 58 in 1979). But since that time, there have been 15 individuals who have crossed the Channel at older ages than Doc (see here) – and many more on the horizon planning swims in channels, lakes and rivers around the world.

So it appears 50 is the new 30 and 60 is the new 40 in the open water – a great demographic trend in the sport. Either on land or in the water, the aging population is seeking healthful ways towards the Fountain of Youth.

Ram Barkai of South Africa is shown above – an example of an athlete who is representative of both the downward and upward changes in the sport where Baby Boomers talk about the 60°F’s as the new 40°F’s, the 50°Fs are the new 30F°s and the 50s as the new 30s and 60s as the new 40s in terms of chronological age and athletic achievement.