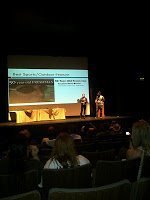 The well-received film about the open water legend heading back to compete against college women was selected to be shown at the 2012 International Aquatic History Symposium & Film Festival in Ft. Lauderdale, Florida.

The film will be shown on May 10th in the big theatre during the public screenings and it will screen in the small theatre every day thereafter.