60 Years Ago In The English Channel 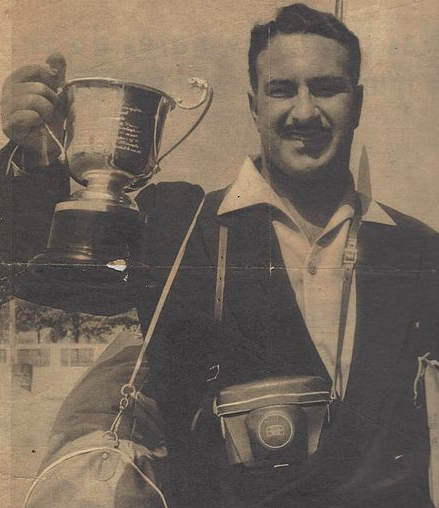 Abilio Couto crossed the English Channel in 1958 and 1959 when escorts included rowing boats.

Grandson Daniel Couto describes the 60th anniversary of his first English Channel crossing, “On August 10th 2018, it is time to celebrate the 50th anniversary of an historic achievement of Brazilian swimming by Abilio and his team that left from Cap Gris Nez in France to try to become the first swimmer from South America to cross the English Channel.

The challenge was huge, never before a swimmer from a tropical country had overcome the cold currents of the English Channel, which was 16°C at that dawn.

On Sunday, August 10th, Abilio and his coach, Miguel Maciel from Argentina, received a call from Channel Swimming Association saying that the swim would start that morning. The crew got together at 12:00 pm at Eastern Docks and left Dover on the vessel Victor with Captain Hutchinson towards France.

The swim would began at Cap Gris Nez. They arrived in France at about 2:30 am together with other support boats.

It was 3:40 am and the water temperature was 16°C (61°F) when Couto threw himself into the sea. There was an exchange of support boat rowers and at 5:20 am the crew communicated with the German boat Dutch Coaster that was passing by. At 8:05 am, the sea began to get rough and with a heavy fog and visibility of 450 meters. At 8:40 am, the fog became even worse with visibility of 73 meters. The fog began to slightly disappear at 9:40 am, but then worsened again at 10:15 am, so the boat had to keep making constant sounds to warn other vessels.

“At 10:20 am, the boat SS Hulst began to come straight to us, so our pilot quickly waved flashes with the lamp and collision was avoided. Hulst thanked the rapid exchange of signs,” wrote the observer MJ Wood.

The fog was finally lifted by 11:10 am. The boat Prince Albert passed by at 11:20 am and at 11:23 am the vessel SS Burchel reduced its speed so the swimmer could pass through. They asked about the ship South Goodwin and were informed that it was located 2 miles away from them. At that time, the observer estimated that Couto had about 8 km more to complete after only 7 hours 43 minutes which meant a possible world record.

At 11:25 am the boat Setubal, passed by, followed by Atlantic, Louis, Antarctic Ocean and Saloinka at 11:40 am. At 12:30 pm, a strong tide filled the English Channel, making the swimmer lose some of his progress. At this point he were 2.5 km from the coast.

At 1:30 pm, the swimmer was slowly closing in on England. As he continued until 3:30 pm, the success of the swim looked promising.

At 4:25 pm, Couto reached the English shore despite walking on the beach in Dover with difficulty after 12 hours 45 minutes.