51 Years Young With No Plans To Slow Down 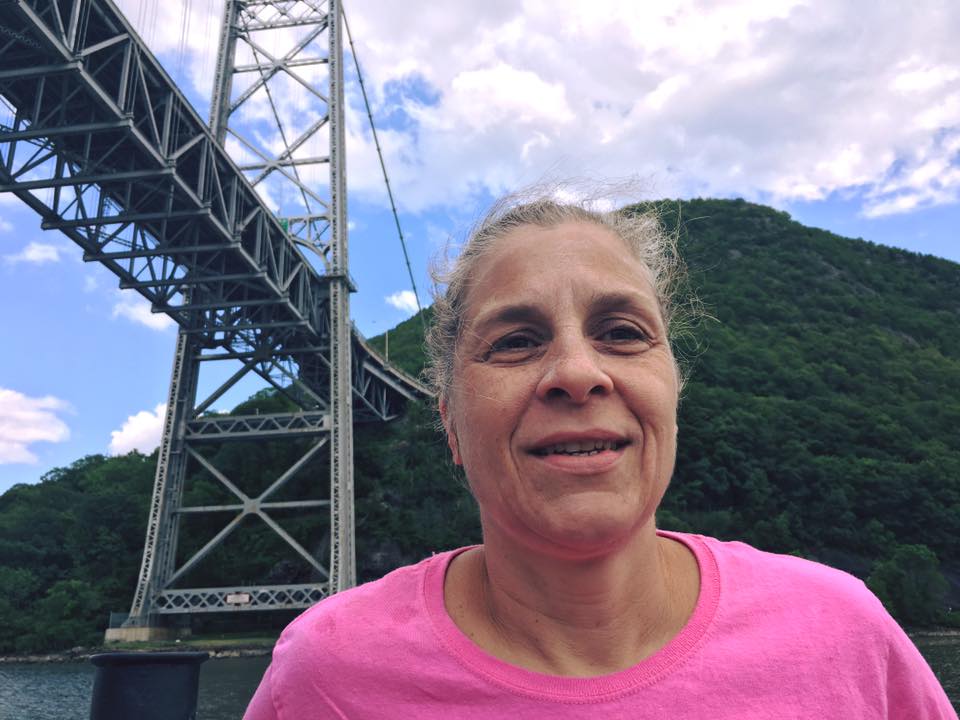 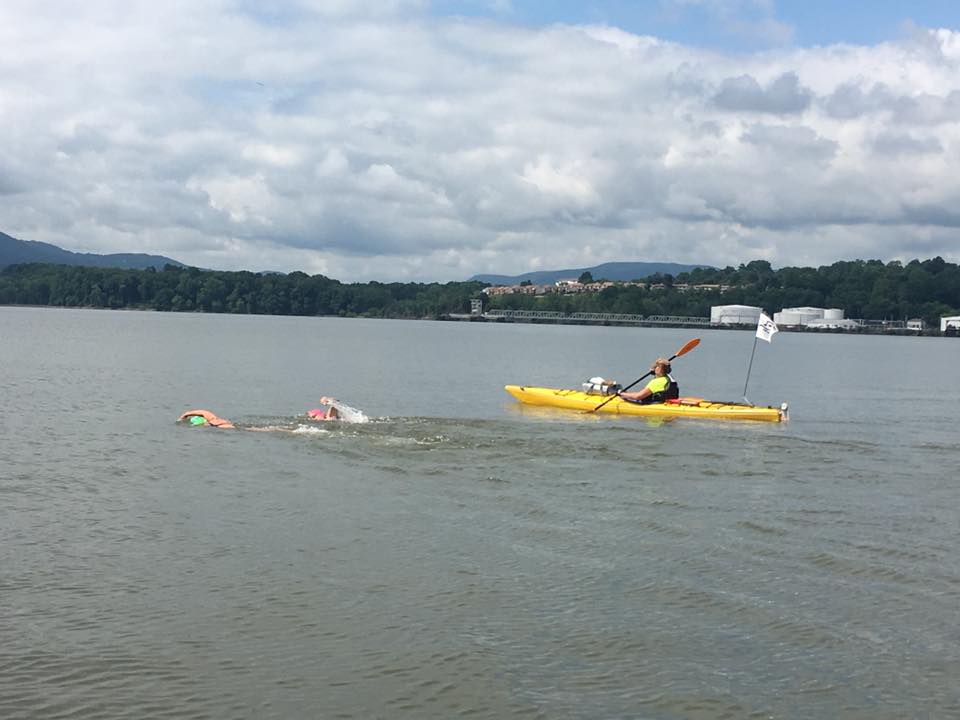 Reinke completed all 7 stages of the 120-mile (193 km) 8 Bridges Hudson River Swim earlier this year in a cumulative time of 38 hours 43 minutes, the fourth fastest in history.

Daily News of Open Water Swimming: Take us through Cheryl’s typical weekday during her heavy training period? For example, when does she workout (swim and dryland), where, how long, and how does that training fit without her daily lifestyle?

Jamie Burton: The buzz of the alarm clock signals the start of another busy weekday for Cheryl, marathon swimmer by passion, engineer by trade. She starts her day with a 3-4 hour swim workout at the Rock Hill YMCA Aquatic Center before heading off to work. Those work days can stretch into the wee hours, but her passion for the sport is what keeps her motivated as well as having a core group of like-minded friends and supportive family.

In addition to her own training, career, and family, she joins friends on social bike rides and group runs as well as mentors other swimmers of all ages and skill levels. She swears she has the same 24 hours in the day as everyone else, but I believe she has at least 30 hours just to fit it all in as she does. It was a real treat that she took some time to share with me her thoughts on her passion, where it has brought her and what the future may have in store.


Daily News of Open Water Swimming: What drives Cheryl to attempt something like the 120-mile 8 Bridges Swim?

Jamie Burton: Before we can look at where Cheryl is now with her swimming and what she has set her sights on next, I wanted to get a sense of what brought her to this point in her life. She got her first taste of the cool blue when she joined a summer swim league at 9 years old. She and her parents quickly realized that this was more than a way to pass the summer hours, this was the beginning of a lifelong passion.

Seeing this in their daughter, her parents signed her up for the local AAU team. She continued to swim competitively through high school and went to Wright State University on a swimming scholarship. As life often does, she was thrown a curveball in the form of multiple shoulder surgeries in her sophomore and junior years with the final surgery ending her college swimming career.

Life moved on and she abandoned swimming, she met her husband while attending Wright State, began a successful career as a one of the few women in the automation engineering field, and raised two wonderful children. In 2008, at 44 years old, life was good but it was time to find a new adventure. She dabbled for a season in triathlons and reignited her passion for swimming. While she was train for running and cycling, she found herself focusing on swimming.

In 2009, she competed in her first masters pool meet in her hometown of Cleveland, Ohio. Over the next 2 years she continued to compete from time to time in pool meets. The breakthrough for her came in 2010 while she was blowing off some steam with a group of masters swimmers in Charleston, South Carolina.

While in the locker room, she met Kathleen Wilson and ended up joining her for the workout. Between sets, she made an off-handed remark about her hatred of flip turns. Wilson responded with an invitation to try open water which set Cheryl on a course that would forever change her outlook on swimming. Her first taste of open water was a 2.4-mile event suggested to her by Wilson. Cheryl not only fell in love with it, she excelled at it, placing 3rd in the event behind two 15-year-olds. After years away from the water, she found her way back and joined a community that both encouraged and challenged her as a newcomer. She immersed herself in every aspect of open water swimming, research, analyzing, and learning everything she could about her newfound niche.

Daily News of Open Water Swimming: What were the next steps after that accomplishment?

Jamie Burton: Since 2010, she has continued to learn and grow as a marathon swimmer. So much so that she feels she is a better swimmer now than ever before in her life. The decline in speed that comes with age was replaced with a far more valuable mental toughness.

When she turned 50, she wanted to commemorate that milestone by tackling S.C.A.R. in Arizona, a swim she likely would not have been able to do at 20 years of age. She had never done a multi-stage race and cold water presented yet another challenge which she met with grit and calculated determination. She praises Kent Nicholas, his crew and the other swimmers with creating a memorable swim event. While the race itself was an amazing experience that she shared with her husband, the event also allowed her the opportunity to forge new friendships over the 4-day adventure. This would come in handy as she hit the post-race blues that are sure to follow once the training is done and goals are accomplished.

She struggled to figure out what would be her next challenge, until she recalled her new friend and fellow S.C.A.R. swimmer, Anna DeLozier talking about swimming 8 Bridges shortly after S.C.A.R. Cheryl followed DeLozier, and immediately knew this would be the next challenge on her horizon.

Earlier this year, she pushed her limits by attempting the 8 Bridges Swim. She says that she has always been driven to challenge herself mentally and physically which motivated her to sign up for the 120-mile swim. 8 Bridges Swim would test her mind and body, as not only would she need to have the fortitude and endurance to navigate 120 miles, but she would need to have a certain level of speed to be able to complete each stage before the mighty Hudson’s tide changed. In addition to the challenge the swim presented, it was also an opportunity to share this experience with her life partner (her husband, Chris) as he kayaked by her side as they passed such iconic sites as the Statue of Liberty, Manhattan, and West Point. She continues to be amazed by what the body can accomplish when the mind allows it to happen. 8 Bridges proved that mental focus and physical capabilities need to be trained together to attain seemingly possible goals. These experiences and lessons are what drive her to continue to challenge herself in the sport.


Daily News of Open Water Swimming: What is she going to do after winning the 8 Bridges Swim?

Jamie Burton: Seek out the next challenge. Cheryl is planning to swim a 24+ hour swim in a local lake next year. Not only will it continue to push her limits, it will also allow her to raise funds for the local YMCA swim and water safety programs. She is happy to be able to give back to a community who has been so supportive of her swimming.

Next year, she also hopes to swim 20 Bridges because of her incredible Hudson experience with 8 Bridges and END-WET to test her endurance with the distance and rustic location.

Cheryl has had the support and encouragement of fellow swimmers in the community since the beginning. They have been particularly helpful the past couple of years as she has sought out greater challenges with swimming S.C.A.R. and 8 Bridges. These life-changing events not only fueled her desire to keep pushing her limits, but also to give back to the community that helped bring her to this point.

She has done so by promoting swimming, both open water and pool, in her community. She started a masters swim program in conjunction with the local YMCA and her weekly open water swims have grown from 3 swimmers to more than 50. This year, she had the opportunity to mentor two young swimmers, culminating in pacing the 16-year-old in the Low Country Splash 5-mile race and the Upstate Splash 2.4 with the 11-year-old. It gave her great pleasure to watch the enjoyment and feeling of accomplishment from both young ladies.

Cheryl strives to share the joy and challenge of swimming with anyone willing to dip their toes in the water. One of her favorite fun workouts is her Black Friday 100×100 (50s or 75s). She began this tradition in 2009 and every year a few more brave souls hit the pool deck to challenge themselves after perhaps a little too much indulgence on Thanksgiving Day.

Daily News of Open Water Swimming: What do you feed on or drink when you do these long swims?

Jamie Burton: The particulars and bits of Cheryl’s training regimen…she states that she has changed her eating habits over the last year to a LCHF diet. She did this in preparation for 8 Bridges and has decided to stick with it as it has improved her overall well-being.

Because of this change in diet, she eats very little before a marathon swim. An apple and hot tea with milk were her pre-swim routine during 8 Bridges. She would follow that up with electrolyte-enhanced water just before the swim. During the races, she fuels every 20 minutes with the first 2 feeds being simply more electrolyte enhanced water and every hour a serving of applesauce with Maxim.

Post-race is when she gets ravenous and goes in search of the largest steak or burger she can find. If that isn’t enough, she will add in some mashed potatoes. Cheryl has learned over the years that it takes more than swimming talent, you have to be smart and precise in every aspect from training to fueling to work-life balance.

Daily News of Open Water Swimming: What do you see in Cheryl’s future?

Jamie Burton: It was a pleasure learning a little more about what makes her as a marathon swimmer, tick. She has no plans to slow down in her pursuit of greater and greater open water swim challenges. Her dream swims include a tropical location and a marathon swim that will allow her to see just how far she can push her mind and body.

With that in mind, I anticipate great things in the future for this remarkable athlete.


Reinke was nominated for the 2016 World Open Water Swimming Woman of the Year among the following inspirational individuals: