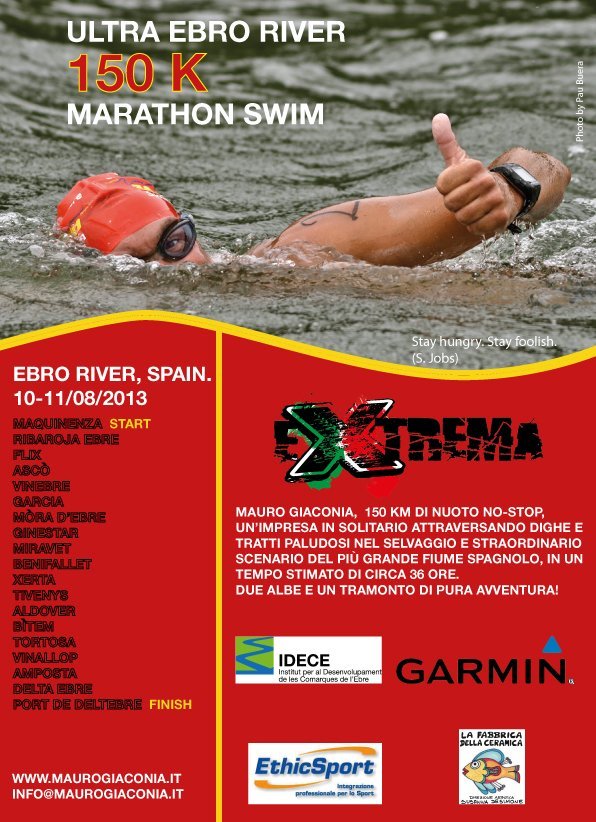 Mauro Giaconia is going to Catalonia, Spain for his next challenge in the river Ebro.

He will attempt to swim 150 km down the river. “My wish is to challenge myself,” says the 42-year-old. “When last year I saw this river, the largest of Spain in length and flow rate with its wonderful and wild landscapes and its clear and comfortable water, I thought that it would be the perfect place where to try a new, real challenge”.

The Ultra Ebro River – 150K Marathon Swim will be held in July with the collaboration of the IDECE (Institut per al Desenvolupament de les Comarques de l’Ebre) and the CHEbro for the bureaucratic authorizations and the necessary logistical support for boats and canoes. The Italian will start his swim at dawn on August 10th at the Maquinienza castle. He will cross the 18 villages that border the river until he will reach the harbor of Port de Deltebre.

After 2 sunrises, a sunset, and the crossing of 3 dams at RivaRoja, Flix, and Xerta, Giaconia will complete the swim at the delta river, less than 3 km far from the sea, which will impact the last 20 km with winds and currents. “I am excited by this wonderful and generous land and by the enthusiasm of the people, they helped me a lot in giving me precious information to achieve this challenge. It will be also the first time that I will swim at night in a river. It will be a real thrill between beautiful and adventurous landscapes. The first part will be very hard, both for the water temperature, around 20°C, and the absence of a current because for the first 40 km I will swim inside the dam.”