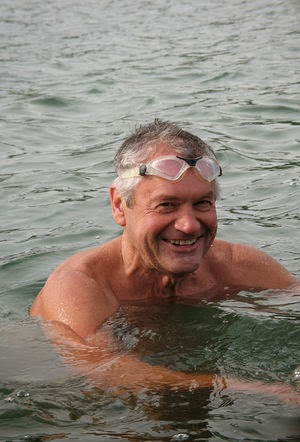 Vito Bialla is teaming up with Susan Moody and Mauricio Prieto, two other powerful fundraisers when it comes to charity swims in a 6-person relay attempt across the Sea of Cortez in Mexico.

A sextet of Bialla, Moody, Prieto, Luane Rowe, Richard Ernst and Antonio Argüelles will raise more money on their 88-mile (141.6 km) charity relay across the formidable Sea of Cortez.

They plan to start on June 1st 2014 from La Paz, the capital city of the Mexican state of Baja California Sur, and swim eastward across the sea facing all kinds of marine life and conditions. It will not be easy and has been site of several other solo and relay attempts in the recent past (2 relays and 2 solo attempts).

The team of 6 is well-prepared, seasoned and armed with Safe Sea, guided by GPS, sustained by KRAVE and a whole lotta determination. Bialla has 3 attempts under his command on the Sea of Cortez – all those hundreds of hours of navigation and escort will be put to excellent use and a tough test.