60 Minutes Over The Entire Week 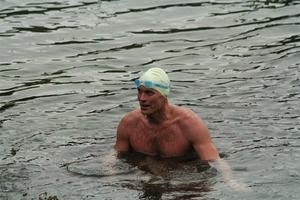 America’s CBS 60 Minutes television crew has descended upon Cork, Ireland to film the renowned Cork Distance Week with a focus on Ned Denison and his intense physiological and psychological preparation for channel swimmers from around the world.

It is rare that adults willingly subject themselves to pain and suffering…and smile for it.

But the swimmers are proud to commit themselves to the most difficult endurance training outside of the non-military world. The campers know they are in for a non-stop week of high mileage in cold, rough water overlaid with purposeful, constant psychological stress. The ultimate goal to help its participants to achieve their channel swimming goals.

Cork Distance Week was nominated for the 2012 World Open Water Swimming Offering of the Year award. Its nomination read, “A tiny part of the world – Sandycove Island in Ireland – has become a must-do and must-see in the channel swimming world. Sandycove plays host to the Cork Distance Week, the absolutely most brutal, the most unforgiving, the downright dastardly difficult open water swimming camp in the world. Led by a mountain of a man who has pushed himself to the brink, the Cork Distance Week has a tremendous record of channel swimming success. Offered for an unbelievable reasonable price in elements that can be completely and thoroughly unreasonable, the Cork Distance Week prepares all-comers for anything and everything in the open water. For its 8-day high mileage of intense preparation, for its unyielding psychological and physiological stress that it offers, for its unequaled record of success, the Cork Distance Week by Ned Denison is a worthy nominee for the 2012 WOWSA Open Water Swimming Offering of the Year.”

The American producers, cameramen and staff are ready with a plethora of filming gear and high expectations that nothing they have seen or heard yet will rival what Denison subjects his gleeful subjects to over the marine domain of coastal Ireland.

“The 6th annual Cork Distance Week kicked off on Saturday,” explains Denison. “48 swimmers took to the crisp water – average 14ºC or 57ºFC – for the first of 16 scheduled sessions. The 6 am start was a harsh wake-up and a ‘warm’ welcome to Sandycove Island, Ireland. This year brings the presence of CBS News 60 Minutes Sports which is covering the event with two camera/sound crews, camera boat, drone and underwater camera diver.

At the swimmer introductions after the session there were a few tremendous rounds of applause for Finbarr Hedderman and Sabrina Wiedmer for their North Channel solo swims last week. Gordon Adair for his Strait of Gibraltar crossing; finally after an earlier attempt after 8 days of high wind. Steve Payne, 6 times denied an English Channel success and he is going back. With many going to the English Channel over the next 3 to 10 weeks, two in particular stood out: Kevin Williams on standby so he apologised in advance if he disappeared without saying goodbye and Ciaran Byrne who is set for Catalina Channel on Friday to complete his Triple Crown of Open Water Swimming. Then the crew followed the gang to the ‘Vibes & Scribes’ Lee Swim with more than 500 swimmers
.”

The 60 Minutes crew will film some of the world’s most hardened endurance athletes who are more than willing and enthused to push themselves past the point of discomfort and stress. They are entering the world of channel swimming.

CBS will be there to capture all the sacrifice and smiles, commitment and confusion, hypothermia and happiness.