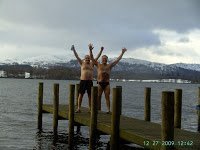 It will be a relay that will go down in the annals of great lake swims.

Thomas Noblett explains, “The team was selected based on their strong characters, good team-playing qualities and ability to withstand the cold.

Thomas was the BLDSA Swimmer of the Year 2009, and did a 2-Way Windermere, Windermere, Ullswater, Derwentwater, Coniston, Coniston Veterans, Channel attempts and part of a 3-Way Windermere Relay in 2010, Champion of Champions Dover, Liverpool docks and a 15K Loch Sheelin.

Michelle did the English Channel, Windermere and part of a 3-Way Windermere relay in 2010, a 2-Person Channel Relay and Loch Lomond.