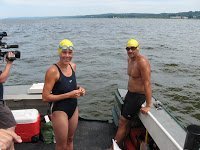 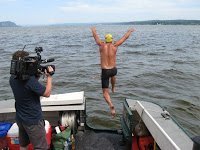 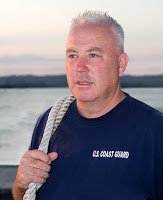 Of the hundreds of new open water swimming events that were started during 2011, most have established a firm course for a successful future. In New York, the new 7-day, 7-stage 8 Bridges Hudson River Swim last July was one such unique event – just quite a bit longer and more challenging.

Dr. Rondi Davis and Dave Barra were the only swimmers to start all seven stages. They explained about their dream swim come true. “From the peaceful Catskills to the dramatic Narrows in New York Harbor, 19 swimmers covered 120 miles of the Hudson River’s great stream from the Rip Van Winkle Bridge to the Verrazano-Narrows Bridge. For seven straight days, each day’s marathon swim began just north of one bridge and ended on the south side of the next, covering distances ranging between 13.2 and 19.8 miles. The swims were timed to benefit from the estuary’s ebb tide.”

Dave of High Falls, New York nearly made the entire 120 miles, coming within 0.2 miles of the 19.8-mile leg when he ran smack into a 1.5-knot flood tide. Just short of the Tappan Zee Bridge. Dave had been swimming for 9 hours and 30 minutes before he admitted that “some days the river wins.”

Rondi, the record-setting swimmer around Manhattan Island, was the class of the field with the fastest legs in five of the seven downstream stages. Completing a speedy 110 miles of the 120-mile stage swim, but she had to pull out of two stages due to shoulder pain.

Up to five swimmers joined Dave and Rondi for the first five stages, including John Humenik of New York who won the two stages (#4 and #5) where Rondi had to prematurely retire. John overcame an hour-long flood tide when he won the 19.8-mile Stage 5 swim that included water unnaturally heated by discharge from the Indian Point nuclear power plant.

Triple Crown swimmer Tobey Anne Saracino of Port Chester, New York was the only other finisher of Stage 5. In an 11-day period that began the night before, the courageous Tobey Anne spent the previous night in the hospital receiving six stitches to her lip, then completed the 9 hour 52 minute Stage 5 the morning after. She then packed and flew to California to complete the Catalina Channel to become the 53rd individual to complete the Triple Crown of Open Water Swimming.

Like its shorter Texas cousin, the Highland Lakes Challenge in Austin, 8 Bridges was unforgiving, breaking new marathon swimming ground with its 120-mile course, demanding that its participants step up each day without recovery.

Evan Morrison described the 120-mile challenge as “a swim for the ages, something new and epic and beautiful.”

Janet Harris agreed, “It was incredibly inspiring and confidence-boosting to be able to complete a couple of stage swims, and to see Rondi and Dave find the strength and resilience to keep going day after day.”

The academically-minded Rondi, a geologist by profession, found inspiration in the Hudson River’s romantic, natural beauty. “Each day was new and different and just as amazing as the last. To me studying the tidal currents and working out how to find and benefit from the best currents is like solving a fascinating puzzle.”

In a unique setting, Dave conducted a mid-swim press conference in the middle of the Hudson, calling media attention on the event’s goal: the Hudson River Valley’s water quality issues. The reporters asked questions on Riverkeeper’s water quality testing program boat, conducted in the dramatic chasm created by the Storm King and Break Neck Mountains with Bannerman’s Castle in the background.

The swim raised over US$15,000 for CIBBOWS, Riverkeeper and Launch 5 that work towards making the Hudson River a clean, sustainable and safe environment for all. Rondi explains about the final 18.6-mile, “Stage 7 finished in one of the world’s busiest shipping channels under the mile-wide Verrazanno-Narrows Bridge where the New York Harbor meets the Atlantic Ocean. Escort Pilot Greg Porteus of Launch 5 and a small fleet of kayakers and volunteers provided crucial swim support. They made it a safe and successful event for all.”

Dave added, “The 8 Bridges Hudson River Swim required months of planning and the dedication of so many people to provide the swimmers with safe passage over a week. We all walk away from this with an enormous sense of accomplishment and relief that everything went so well. Already the buzz of next year’s 8 Bridges has started. What a wonderful community to be a part of!“

Photos courtesy of Greg Porteus who is shown in the last photo above. Course map and video clips of the different stages are here..