88 km To Go Down The Paraná River 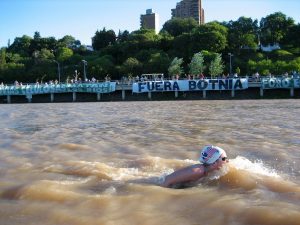 88 km To Go Down The Paraná River

Courtesy of WOWSA, Paraná River, Argentina. Years ago, the FINA Open Water Swimming Grand Prix, now called the FINA UltraMarathon Swim Series, had a stop on its circuit, the 88 km (54.5 miles) Maratón Internacional Hernandarias – Paraná (or the Maraton Nautica Internacional Hernandarias – Parana or Maraton Internacional de Rio Abierto) where swimmers raced from the city Hernandarias to Paraná in Argentina in the Paraná River. The race had started in 1965 where swimmers have long faced tough currents, rough swirling conditions and flotsam. Tens of thousands of spectators line the course in an extremely festive atmosphere. American Erica Rose who finished 3rd in 9 hours 40 minutes in 2007 and 6th in 10 hours 5 minutes in 2005 in the race, recalled her experiences, “The race itself is incredible. It is challenging, for sure. There are some points when the river is narrow and you feel like you’re moving quickly, but there are other points where you can’t see either bank of the river at all and you have no idea where you are or if your rowers are taking you in the right direction.” “The people in Parana and Hernandarias are amazing. They get so excited about the marathon that they celebrate the week leading into it and line the banks of the river when you’re swimming. They’re incredibly supportive of the swimmers and treat us like celebrities.” Courtesy @ 2008 – 2019 by World Open Water Swimming Association