8.8 Meters Of Nothing To Be Worried About 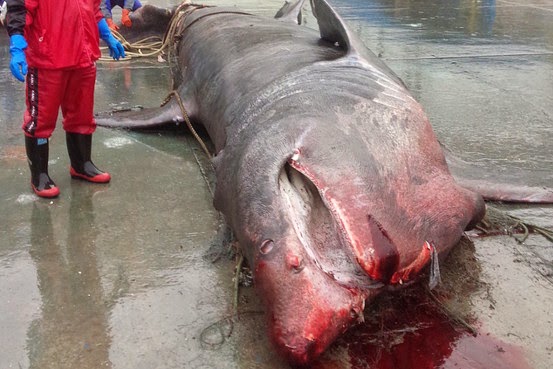 Basking sharks may swim slowly, no more than three miles per hour, are commonly spotted near the water’s surface, and passively feed on plankton as they swim with their mouth open.

But as they sway back and forth with their massive bodies underneath or by an ocean swimmer, they can certainly present a frightening sight.

When there is a shark encounter during a channel swim, should the swimmer immediately come towards the boat? Should the support crew jump in to help the swimmer? Is a RIB or small boat launched from the mother ship? Should the kayaker or paddler position themselves between the swimmer and the shark? Does the kayaker attempt to defend the swimmer with his paddle? Should the crew dump rancid shark meat in the water? Should you always swim with a Shark Shield? Exactly what are the proper safety protocols utilized by channel swimmers around the world?

It completely depends on the decisions and plans of the escort pilot and support crew – and their knowledge of and experience with the local marine life.

Along the northeastern coast of Hokkaido, the Rausu Fisheries Cooperative Association announced that its fishermen found a 8.8-meter basking shark trapped in gill nets. The large shark is commonly observed throughout the Japanese islands and is an example of marine life that Japanese ocean swimmers are aware of.