97 Down, 3 To Go With Bill Welzien Around Key West 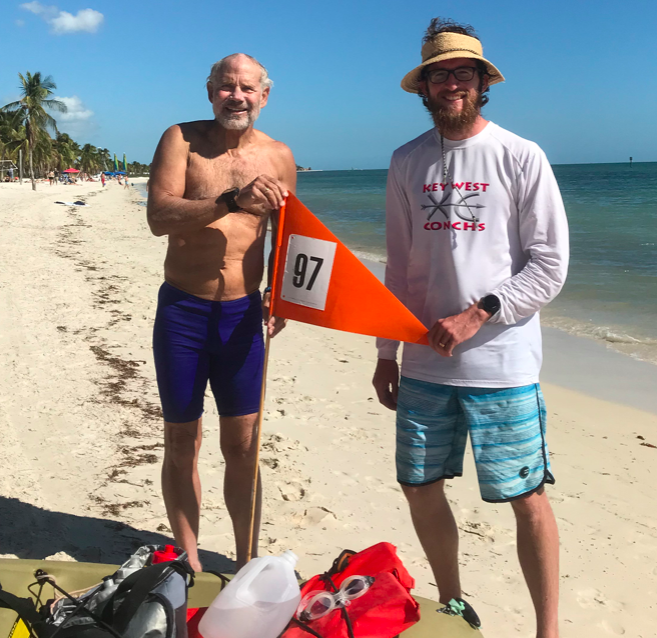 This is his first-person account on the 20.1 km swim.

“My son-in-law Doug Weeks paddled the kayak next to me for my protection as I propelled my body through the waters.

When we swim in the open water, we zig and we zag. Also, if you swim way out, you must then swim way in. If you know the water depths and can aim directly at [these] points, you can save distance and ideally time.

Traditionally, the Swim Around Key West is advertised as 12.5 miles. Interestingly, when this swim distance was configured back in 1977, there were no such thing as a GPS. My swim this time was recorded at about 12 miles.

Since August, I have had trouble with my Garmin 920XT. It has been clicking off before I complete the course. This #97 swim found me with a Garmin 910XT on my left wrist and 920XT on my right wrist. If one went off, my hope was the other would continue to keep track of my split.

As I checked the weather over the days leading up to this swim, the conditions look pretty good. The wind was to be between 8-12 mph out the NE. The water temperature was recorded at 77.4°F (25°C). The last swim was uncomfortably chilly (74°F). This swim was right on the borderline between chilly and comfortable.

High tide in the Key West Harbor was due at 10:00 am. That meant I could start from the west pole at Smathers Beach anywhere between 7:00 and 7:30 and get some assistance from the tide.

Doug and I arrived at the beach at about 6:30 am. I had 6 sport bottles with Hammer Perpetuem mixed with water. I also placed a dollop of Hammer Gel in each bottle. My custom is to drink one full bottle and eat a Clif Bar right before I enter the water. After I ate, we prayed and I entered the water.

The air temperature was 70°F. The water was chilly on my skin as I walked in. I swam out to the start/finish pole. I started my two Garmin GPS watches and took my first stroke. The official start time was 7:07 am. Since sunrise was at 6:45 am, I was in good light. No threatening storm clouds anywhere to be seen. The wind at the start was 5 mph out of the NE. The conditions looked great.”

Welzien had a unique taper for #97. He did not swim between November 7th-15th – and was in for some surprises.

He continued, “The tidal prediction chart was not very encouraging. It showed a high tide at 10:00 am of 1.6 and a low at 2:56 pm of 0.6. That is not very high and very low. On paper, it looked like I would be in the water for about 6 hours 45 minutes. But the tide appeared higher than the prediction table read. My first mile was good and the second as well. This encouraged me.

When we left the Atlantic Ocean side and turned into the harbor the water was rougher than I expected. There were two cruise ships docked. The first docked at 7:00 am and the second at 7:30 am. So these ships posed no problem to us. My times between miles 3-5 were very solid. Each one was sub-30 minutes. Mile 4 was the fastest at a 21:04. I was under the Fleming Cut Bridge before 2 hours 20 minutes. More good news.

But as I swam out from the bridge heading through the mooring field and towards Sigsbee we met a full head wind. This was more than I expected. I think Doug was surprised by the wind as well. He later told me that he had to paddle steadily from the time we entered the Harbor until we reached about mile 8. That is a good 5.5 miles without relaxing. There is no question that wind like we hit is more challenging for the kayaker sitting on top of the water than the swimmer in the water. I just kept my head down and swam. Miles 6 and 7 were slower coming in each at just under 36 minutes.

I knew the wind would die down as I made my way to the second bridge on the course, the Cow Key Channel Bridge. After mile 8, Doug was able to relax some. As we went under that bridge, we looked at the pilings to see the depth of the water. We look at the water line. It looked good so we headed up the center. As I began to make my turn back into the Atlantic the water was stirred up. That meant I couldn’t see the traditionally shallow’s bottom. I couldn’t judge the depth by sight to know how to configure my stroke.

It is good to avoid touching the bottom as there are sharp coral like things and stingy organisms on the bottom. I prayed my way through; I swam by faith and not by sight. Swimming through Cow Key I catch the outgoing tide, so, for that mile (9-10) I clocked a just under 26-minute mile.

The water was deep enough to begin my full stroking again. Now the wind had become a tail wind. Still there was a good amount of chop to the water. I was bummed out when I saw that my Garmin 920 gave out at mile 8 and hoped my 910 would prove reliable. There were a few times the ‘lost signal push enter’, alert appeared. When that happens I need to pause my swimming and push the button. You will notice that the finish time between the two watches records a discrepancy of 6 minutes 3 seconds. I have chosen to go with the 6:12.55 from the Garmin 920XT over the Garmin 910XT time of 6:18:58 based on Doug’s watch time of 6:12.48. In order to record my finish time, I need to first touch the pole and then hit the stop button on my watch. Doug recorded my finish time as he witnessed my touch. In this case I had two finish buttons to touch.

I am surely thankful that I will never have to swim #97 again. I was eager to get out and warm up. Even 77°F is not warm enough for me.

Each swim we fly the numbered orange pennant. I have these flags from the Annual Swim Around Key West. They have proven handy to record the swim completed in the victory photo. 6:12.55 is not to bad. Surely faster than what I expected based on the tide chart.”

Welzien may have one more opportunity before the end of the year to attempt #98. “The window is very narrow. It will have to be December 4th. If the water is below 78°F and the wind is up, or, if it is stormy, I will let it go. My original goal was to complete the 100th swim by the end of this year, but with Hurricane Irma and the foiled attempts to complete my #94 this is where we ended up.”

The 67-year-old’s goal is to resume my last swims in April and attempt his Century Swim” – the 100th circumnavigation swim around Key West – in May 2018. “The 42nd Annual Swim Around Key West is scheduled for June 16th 2018. I would like to attempt #101 swim at that event.”