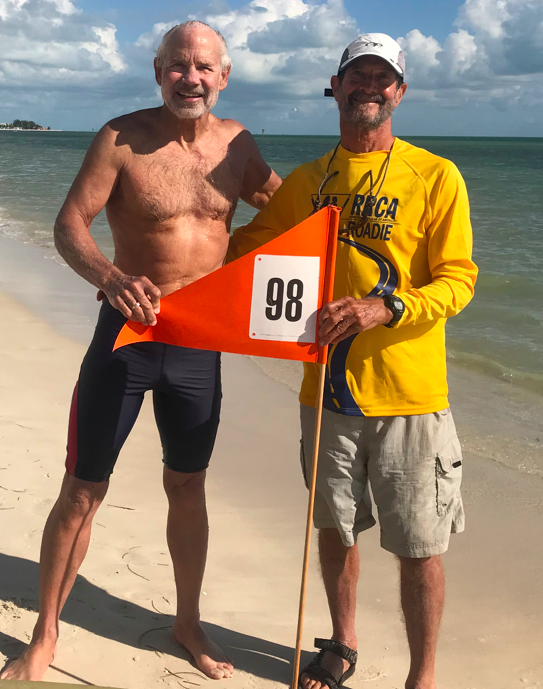 “If you aim at nothing, you will surely hit it,” is an old adage repeated by Bill Welzien who is aiming to complete his Century Swim – 100 cumulative 20.1 km swims in the warm waters around the island Key West, Florida.


Well, I aimed at completing my 100th swim by the end of this year and I didn’t hit it, but I got a whole lot closer than when I began this year.

My first 2017 Swim around Key West was on May 10th. It was a Wednesday and a full moon. My son Billy paddled for me [shown above]. I completed at least one revolution around this ‘rock’ each month since then. That May swim was #88. I was able to pull off three doubles this year (two swims each in May, July and November), but that wasn’t enough to get me to my goal. By God’s grace, my health remained good, but weather affected critical goal advancing attempts.

After my September 4th Labor Day swim #94, things got quiet swim wise until October 18th. Hurricane Irma threw a big wrench into the operation. She hit the Florida Keys on September 10th. Things got pretty messy and chaotic. My next swim around wasn’t until when I was able to bag #95 in October day, before the new moon. That was a 45-day hiatus – way too long – and lamentably, little training time.

November was a prodigious month with two swims, the first on November 2nd (#96) and the next on the 18th (#97). But that wasn’t enough to put me in range to achieve #100 this year. My last Key West go around for this year was swum on December 4th.

Swim #98 was a very positive experience. I had several things going for me. The water warmed up; I am not a fan of chilly water. For me, chilly is anywhere below 77°F. This swim found the water just under 77.5°F. I hate swimming, only to find myself thinking, always and only of, how cold I am – that was not the case this time.

The next big thing I had going for me was that my good friend Captain Don Nelson agreed to kayak for me. Don is a main component in the organization of the annual Swim Around Key West. He has led our Committee Boat crew for many years. They keep a careful eye on all our participants.

Don arrived at my home just after 6:00 am for a 7:50 start. I had the van packed the night before. My Hobie Kayak was strapped to my van roof. I had my, #98 pennant, the kayak seat back, and paddle inside. Don brought his own life jacket. He had a full gallon of water and protein bars and I had mixed six sport bottles of Hammer Nutrition Perpetuem Strawberry powder with water. I put a dollop of Hammer Gel in each bottle, which I squeezed out of their flask jugs. I place these bottles are in a soft pack cooler, but purposely left air temperature. I keep an extra pair of goggles in that bag. I also have a string with a slip knot attached around my lead bottle. The string comes in handy in the tossing of the sport bottle, especially in choppy and windy conditions. I also have a small hard cooler with ice in it. I keep this in my van. Inside it are a protein drink and some Clif protein bars for my post swim recovery. Having everything ready saves time for a quick trip to our start/finish point off Smathers Beach.

I can’t thank the Lord enough for my discovery of SolRx sunscreen products. For decades, I used the maximum strength zinc in the form of Desitin and Butt-Paste. Those are fully effective as a full sun block but ever so messy and difficult to work with. I have been applying the SolRx Matte Zinc SPF 50 at home before jumping in the van. That saves me time and has proven highly effective in shielding my skin from our harsh sun’s rays. I apply it in my bathroom at home and that application lasts the full time I am in the water. It washes off easily with soap and water.

The wind was predicted to be 8-15 out of the Northeast. The wind conditions proved to be very much like the last swim.

As we unloaded at the beach, I noted how nice it was to start in daylight. The sun rose that morning at 6:56 am. We loaded the kayak and carried it down to the beach. I prayed with Don and we launched out. I made my way slowly to the start/finish pole doing various strokes to warm my muscles. It was 7:54 am. when I started my Garmin 920XT. We headed west for a clockwise journey around the Island of Key West.

This swim was supposed to take a long time. Based on the tide chart things looked pretty poor. The high tide was scheduled for 10:41 am in the Key West Harbor at a height of 1.4 feet. The low was predicted to be 0.4 feet at 3:17 pm. That is a mighty low high tide and a vey high low tide. What that means is that I should expect little help, tidally speaking. I guessed this swim could take me a good six and three quarters hours to complete.

As I passed Knight Pier (formerly White Street Pier), I was impressed at my split. Upon arriving at my first mile I clocked at 30:59. That was encouraging. My cumulative time for the first two miles was just 10 seconds over an hour. I thought this might not be so bad after all.

The Harbor was choppy and windy. Don had to dig in. He had to put his back into it. The Atlantic side was a honeymoon, but now it was time to go to work. Just like swim #97, the wind would not cease to be a factor until mile 8. While Don struggled through the Harbor, I continued to move quickly.

Experience taught me that, if I made it under the Fleming Cut Bridge between 2 hours and 2 hours 15 minutes, I would be on course for a sub 6-hour swim. I got under at just 35 seconds later than the 2:15. But now the wind was a straight on head wind. My slowest mile of the day was swimming through the mooring field out to Sigsbee. That one took almost 37 minutes.

I bounced back time-wise as I stroked on. They say, nothing succeeds like success, and I tried to keep moving. Miles 7 through 10 got progressively faster. It is not unusual for my last two miles in the Atlantic to be among my slowest. However, the once head wind was now at my tail. I know Don appreciated reaching the Cow Key Bridge at mile 9. That generally is a wind free zone and this day that was true. Once we rounded Dead Man’s Curve, he was pushed by the wind to the finish pole.

As I saw that I was on course to a possible sub-6 hour swim, I picked up the pace as I reached the last half mile, which consists of 10 wooden poles. These poles separate the beach goers from boaters. The pole furthest west is the start/finish pole for my swims around the island.

My tradition is to touch the last pole and then hit the enter button on my watch. That means my actual finish time is sooner than reflected. But the time I stopped my watch was 5:56.22. This was my fastest time this whole year, a fine way to close the season.

There are two swims left to reach the century mark. The current plan is aimed for Swim #99 to be attempted on or near the new moon on April 16th or 17th. Then perhaps to try Swim #100 on the next new moon, which would be May 15th or 16th.

We are working now on the 42nd Annual Swim Around Key West on June 16th 2018. We will begin receiving applications on February 15th 2018 at swimaroundkeywest.com.

Remember: If you aim at nothing, you are sure to hit it. So make your goals wisely and persist. Even if you don’t reach it, you will have made real progress going forward. Blessings and remember: Soli Deo Gloria.