A Big Swim Through A Marine Sanctuary 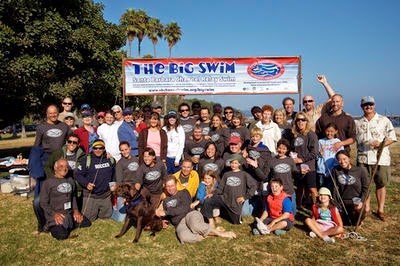 Many adventure swimmers, marathon swimmers, and channel swimmers around the world plan and complete their charity swims in order to raise money and awareness and spur positive action for ecological or environmental causes or non-profit groups.

It would be essentially appropriate in a designated marine sanctuary.

The Big Swim was one of the early charity swims within the national marine sanctuary along the California coast. But it was not your traditional channel crossing. Instead, 55 open water swimmers donated funds to benefit the National Marine Sanctuary Foundation and Heal the Ocean and took off on a 26-mile (42 km) crossing that was organized by Emilio Casanueva, founder of the Santa Barbara Channel Swimming Association.

With great food and great conversation among the large group of swimmers and volunteer support crew, it was an outstanding charity swim from Santa Cruz Island to East Beach in Santa Barbara that raised tens of thousands of dollars. Occasionally, the low-pressure swim relay took stops along the way as the swimmers and crew marveled at the beauty of the California Channel Islands.

The Channel Islands National Marine Sanctuary is a reserve area off the California coast that provides protection to its extraordinary natural and cultural resources so that nature can thrive, historic shipwrecks and artifacts remain respectfully in place, cultural connections remain strong, and careful public use and enjoyment can be sustained. Designated in 1980 by the National Oceanic and Atmospheric Administration, the sanctuary spans 1,470 square miles surrounding five of the Channel Islands: San Miguel, Santa Rosa, Santa Cruz, Anacapa and Santa Barbara.