A Day On Lac St-Jean 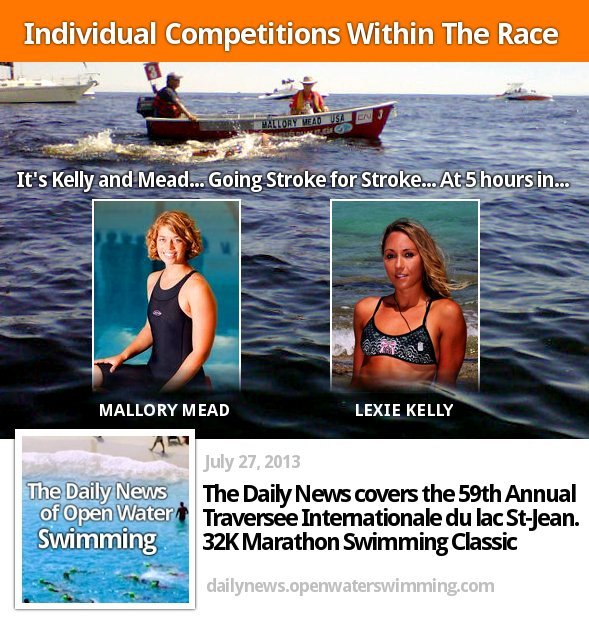 There could not be a better day in Roberval, Quebec for the 59th annual Traversee internationale du lac St-Jean. The 32 km marathon swimming classic combines unique pomp and circumstance with heartfelt grass roots enthusiasm.

25 athletes from the Americas and Europe chugged across lac St-Jean as many of the greats in open water swimming history have done for the 6 previous decades.

Street festivals, concerts, and the public presentations of the athletes make the entire week of global festival celebrating the sport. Newcomers from America like Triple Crowner Mallory Mead and Californian Lexie Kelly joined veterans like Damian Blaum of Argentina, Joanes Hedel of France, Pilar Geijo of Argentina, and Alexander Studzinski of Germany.  The men and women started together in Peribonka in a cold river before heading into the depths of lac St-Jean.

A casual pace would be an understatement to define the start as the pack stayed as one until surrounded by a huge flotilla. The inner circle of the flotilla were manned by the individual boats for each swimmer.  Outfitted with GPS units, the positioning of the swimmers was tracked online by fans and family as well as the Safety Committee and staff located at race headquarters.

Under a windless, cloudless day, the air temperature and water temperature could not be higher. But lac St-Jean is lac St-Jean, 32 km across a round-shaped lake 6 hours north of Montreal in Quebec.

Quebec, a beautiful province on the eastern part of Canada, is a part of the world that holds 3% of the world’s fresh water. With lakes dotting the countryside like freckles on a redhead, its history of competitive lake swimming goes back decades. Its organization and attention to detail are second to none with permanent headquarters to plan for each race year after year.

The community embraces the marathon swimmers like humble rock stars among knowledgeable fans. The triumphs of John Kinsella, Christine Cossette, Claudio Plit, Paul Asmuth, and Petar Stoychev are renowned here and forever etched in the annals of the community. 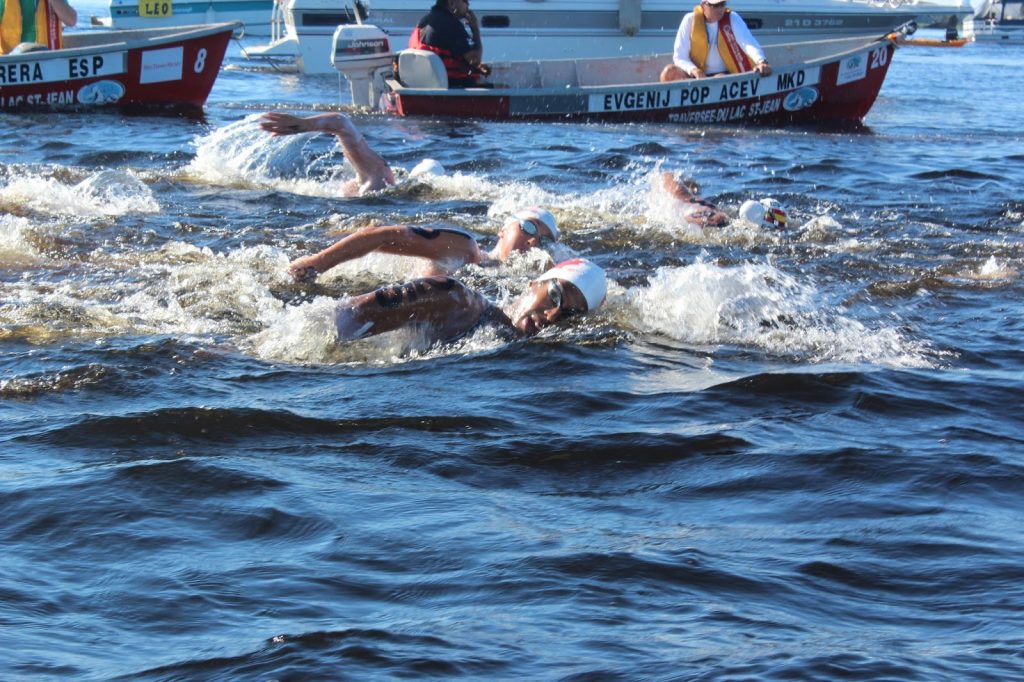 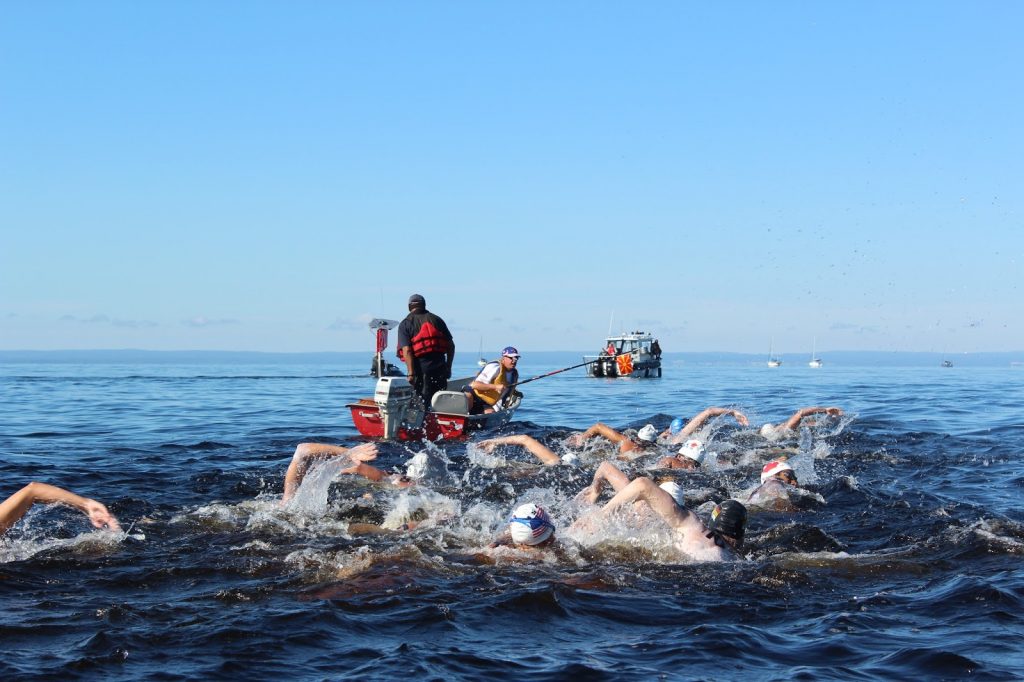 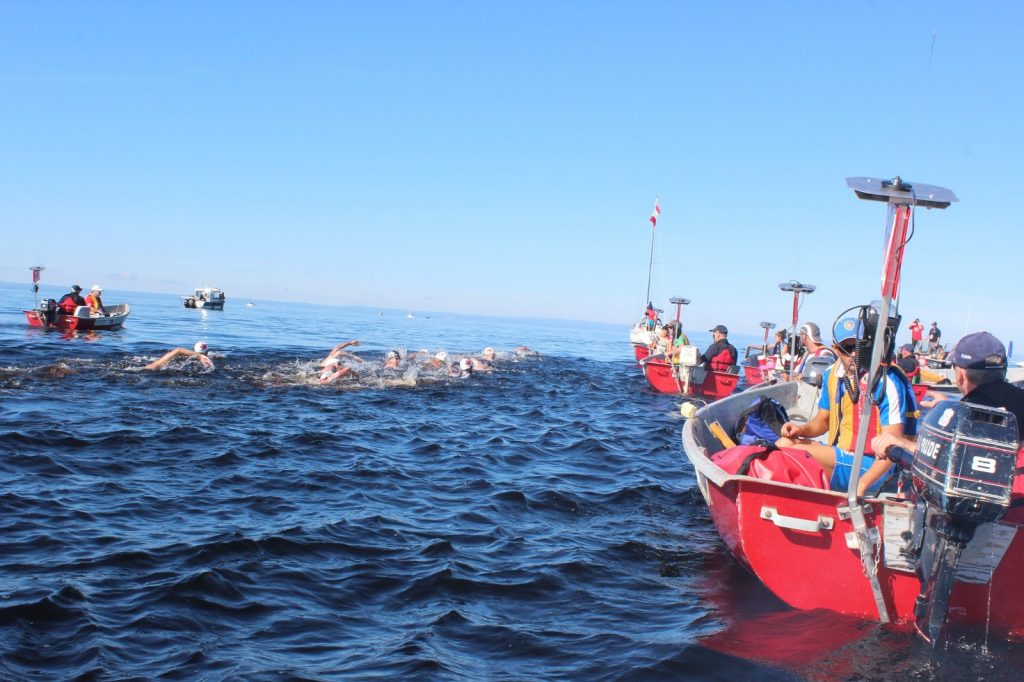 18 swimmers hung with the pack after 1 hour. Men and women competing as equals and none giving an inch to each other. As the escort boats powered their way around the pack like bees around flowers, there was an underlying order among the apparent chaos.

When a swimmer needed to feed, the pilots maneuvered in a safe position so the swimmer’s handlers could hand them fluids and gels from feeding sticks. Like gentlemen at a country club, the handlers and escort pilots operated under the umbrella of mutual respect and a deep sense of fair play and sportsmanship.

The protective umbrella around the swimmers was a festival of calm, camaraderie, and care. The flotilla included escort boats, security boats, media boats, well-wishers, canoers, kayakers, guide boats, and lookie-lous in yachts and fishing vessels. Even when a GPS unit tracking the swimmers malfunctioned, the security boat came over in mid-race and addressed the problem.

The swimmers kept cruising towards the middle of the lake, all bunched together drafting like cyclists in water. But time and distance take its toll, no matter the pace. At the 10 km point, the lead pack suddenly took off in the 66ºF water. Surges were made as the top women were able to hang with the men who took turns pushing the pace.

The conclusion and race results are posted here.