A Deep-Seated Artist, Visionary And Explorer 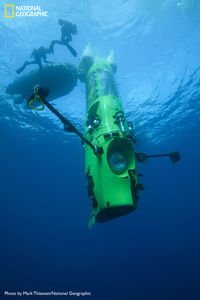 The U.S. government just stopped the National Undersea Research Program due to a variety of budgetary constraints.

But there is a scientifically-oriented artist who is helping support continued deep-sea research and financial support.

Since 1960, the deepest part of the world’s ocean has been devoid of all human life.

But it took a storyteller and one of the biggest names in Hollywood, James Cameron, to return back. Director of such hits as The Terminator, Aliens, The Abyss, Terminator 2: Judgment Day, True Lies, Titanic, and Avatar, Cameron reached the bottom of the Mariana Trench, the deepest part of the ocean, in the Deepsea Challenger submersible last year. He was the first person to do this in a solo descent.

Earlier this week, Cameron gave custody of the submersible to the Woods Hole Oceanographic Institution in Massachusetts.

Its Director of Special Projects David Gallo explained to Science how a renewed excitement in deep-sea exploration is leading to alternative funding sources. “Cameron had trouble getting funding to go down in Deepsea Challenger…but we’re getting an increasing amount of support from individuals and foundations and even some from corporations. That money is fantastic, from the private sector, because it allows us to be truly flexible and allows us to do what we do best, which is to facilitate curiosity-driven research.

We’re looking at ways of doing exactly that, not just relying on the federal government but looking at our relationships with individuals to help us get together the funding to work in places deep inside the ocean, or to do projects which are scientifically risky, for which we normally could not get federal funding.

It’s also about the relationship between humanity and the sea. One thing we know from the ocean now is that the air we breathe, the food we eat, the water we drink, all are tied to the behavior and health of the ocean